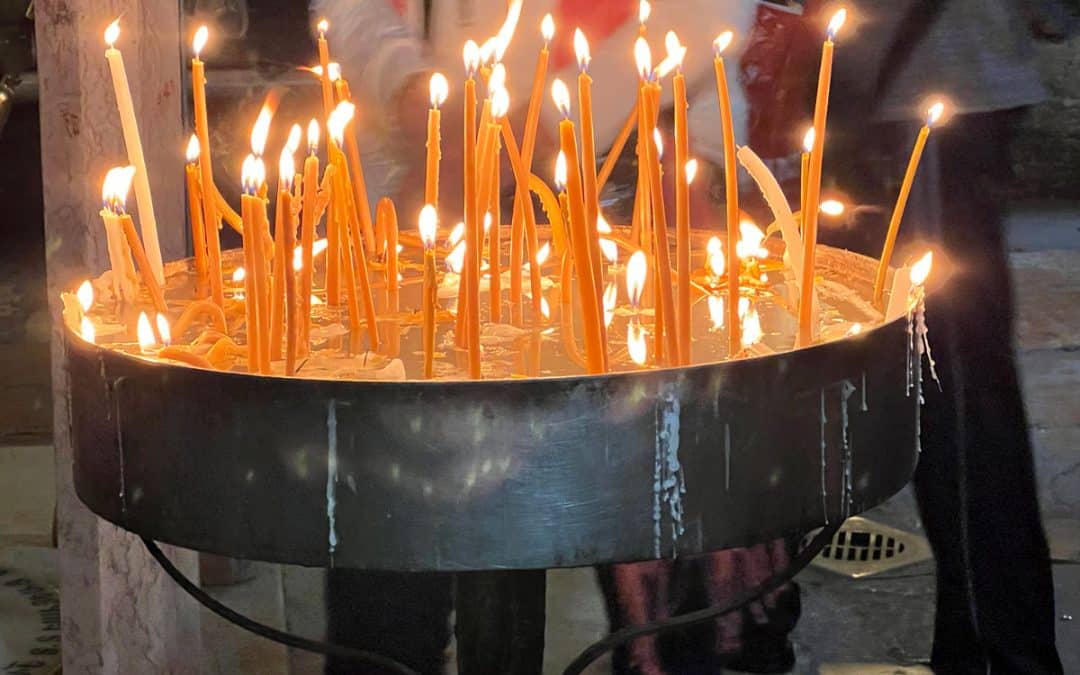 Henry and I recently returned from a long-awaited (and repeatedly postponed!) pilgrimage to the Holy Land. We first traveled there in January 2017 and I blogged about it quite a bit after my return. I sense that this time will be the same, as there’s already so much I want to share.

During Advent, I thought I would focus on the situation for Palestinian Christians in the Holy Land. They are caught in the middle of a complex fight, yet here in America we don’t tend to hear much about it.

The big-picture view of strife in the Holy Land today is usually described as a battle between Arabs and Jews. This is simplistic, because Palestinian Christians are Arab, but they are not Muslims. In fact, Palestinian Christians and Muslims have, of necessity, banded together in the face of what some are now calling apartheid. For example, all Palestinians in Bethlehem, Christians and Muslims, are subjected to Israeli walls, checkpoints, and human rights violations. The stories are horrendous about what it is like to constantly live under oppressive military occupation.

Over the past century, the percentage of Christians in Bethlehem has fallen from 85 to 22. They are faced with an impossible choice: leave the only home they’ve ever known and have a better chance of survival or live in fear of their lives in a place that’s been their spiritual homeland for two thousand years. Understandably, many Palestinian Christians are choosing in favor of a basic human desire: a better life for themselves and their children. They don’t want to live in fear and under oppression—just as is the case for so many of the refugees who arrive on Arizona’s southern border every year.

Many of today’s Palestinian Christians are ending up in South America—far from the land and culture of their birth. In the process, they are being cut off from their religious homeland—not unlike the Jews who were forced from Palestine by the Roman Empire two millennia ago.

In the words of one reporter, “If the current policy against Christians persists, the day will come when no Christians will be left in Bethlehem, and pilgrims visiting the city will have to bring their own priest with them to lead the prayers.”

Please join me in praying for all those who are impacted by this unfolding tragedy…and if you wish to learn more and take action, here’s one place to start.

Thanks Shirin, we had a Christian Palestinian tour guide when we were in Jerusalem 5 years ago. Their situation is awful. The walls that make it necessary for farmers to spend hours getting to fields are repulsive. It is compex and there is no easy answer. Prayers and action are needed. Thanks for raising this up.

You’re welcome, Tom, and thank you for adding your experience to this post. Each of us who travel and raise awareness can help, I believe. It is an awful situation for so many.

Thank you Shirin for continuing to educate those of us who have never visited the Holy Land. Most importantly thank you for connecting the dots among the millions wandering the earth in the diaspora looking for a place to live in peace. We are all connected and they are us. We must continue seeking solutions and making connections.

You’re welcome, Connie, and thank you for joining me on this journey. May we indeed all find peace in our places, through honest dialogue and earnest connections.