When it comes to writing posts for this blog, I will often take time to become still and listen to what rises to my awareness out of the experiences of the past week. As I listened in preparation for this post, what came to mind was a conversation I had with my spiritual director. It was our first conversation since my move, and our first time in many years (perhaps ever?) to meet by phone rather than in person.

That long-distance meeting is the “new normal” for many relationships in my life. While I have intentions of traveling back to Silver City to meet with people in person, I have not yet been able to carve out the time to do so, for a variety of reasons. Some of those reasons have to do with the fact that a move doesn’t just “happen” on a single day. While we slept in this new-to-us house for the first time on December 18, we are nowhere near being “moved in,” with lots of boxes squirreled away in closets and corners (two under my desk) 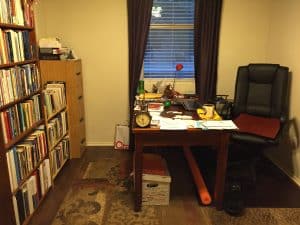 and lots of pictures leaning against walls as we slowly discern what we wish to place where.

There are many things which take time to truly integrate into our lives. Marriage is a good example. Henry and I were married on May 29 (over 20 years ago), but it took us months to truly become a married couple. There was lots of adjusting to thinking like a couple, lots of sorting through duplicate household items, lots of developing relationships with family on both sides.

In my recent conversation with my spiritual director, I mentioned that I’d found myself telling people that January was “nesting month”—but the fact of the matter is that we’re more than halfway through the month and I’m nowhere near nested! She wisely suggested that I might want to consider all of 2016 to be a “nesting season.”

She’s got a point. I could feel myself relaxing as I simply considered the possibility of taking that long view. My editing work has been nonstop since the new year started, and there are so many things I’d like to do around the house that just aren’t happening. So…what if that was okay, and even good? Our culture, which fosters instant gratification in this digital age, could certainly benefit from everyone taking the time to allow rather than push. I find that I’m looking forward to seeing how things will unfold in this season, trusting that the nesting will happen, on many levels, in the weeks and months ahead.

In what aspects of your own life might you need to take the longer view? Whether it’s “nesting” or some other image, where in your life could you benefit from not rushing things, but rather allowing them to unfold?