American Rent is Due 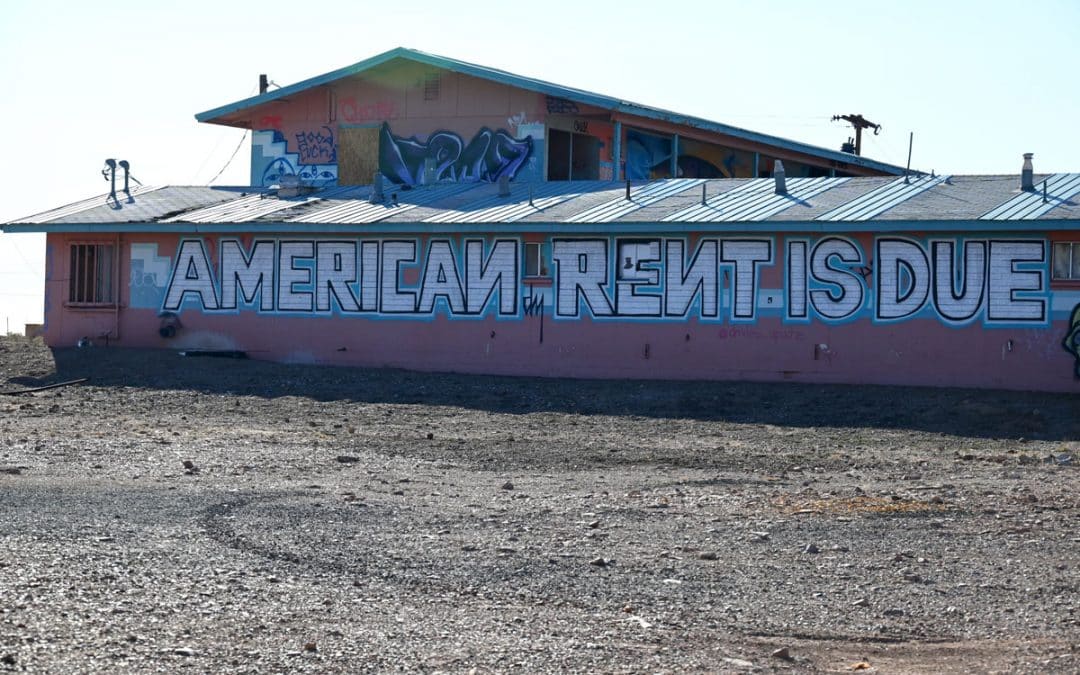 Back in December, Henry and I took a trip to Zion National Park. I’ve shared some winter-wonderland-type photos of that trip on Instagram, but that’s not the focus of my post today. We drove home through the Navajo Nation and were struck and convicted by the sign above, painted on an abandoned motel building just outside the Nation’s borders, forty miles north of Flagstaff, Arizona: American Rent Is Due.

After returning home, I learned more about this art statement through some online research. The Whiting Motel in tiny Gray Mountain, Arizona, was built in the 1950s as a “Gateway to the Grand Canyon.” As newer venues proliferated, the motel gradually deteriorated and was abandoned in January 2005. In the words of one commentator, it was “deserted here to languish without a thought for its appearance or effect on the community or the environment.”

An Indigenous local recently wrote an article about a number of such abandoned properties along Route 89, noting that the motel has been “reclaimed by local artists as part of a beautification movement known as the Painted Desert Project.” It is these artists who wrote American Rent Is Due across the side of the abandoned motel, a clear reference to the taking of Indigenous lands by Americans of European descent.

Though Henry and I drove in and out of the Navajo Nation on our trip, we crossed no border checkpoints. In our church’s antiracism discussion group, we have learned that although over 350 treaties are supposed to guarantee the sovereignty of Native American lands and peoples, those treaties have frequently been broken. Individuals, groups, and even the US government have repeatedly ignored or defiled the promises made to hundreds of Indigenous groups.

So, what American “rent” is due? While there is frequent conversation today about reparations for African Americans whose ancestors endured slavery, there is much less talk about what all Americans owe the Native American Nations whose ancestral lands our predecessors stole and whose people they swindled. The idea of rent being due certainly has logic to it. I do not have answers, but I’m glad for the opportunity to raise questions, because we need to be having conversations about these issues.

As a starting point for learning about this part of our heritage, I invite you to do some research about which Indigenous lands you have inhabited over the course of your life. What can you learn about the people who once cared for the land on which you currently reside? How might God be inviting you to pray and/or work for the betterment of that nation today, if it exists, or to honor their ancestors if the tribe has disappeared?

thanks. a pointed invitation

You’re welcome! Thank you for joining me on this journey.

This is why the pastor at my church gives a land acknowledgment at the beginning of each Sunday service. We acknowledge specifically that we are living on the stolen land of the Tohono O’odham and other nations. This is but a starting point to raise our consciousness. Also, during the “America–love it or leave it” era of the 70s, I saw a bumper sticker on a car as I was driving across the Hopi lands which said “America–love it or give it back.”

Thank you Aston. The land acknowledgment is a helpful beginning. I like the alternative bumper sticker; thank you for sharing that story.

A land acknowledgment: We remember and honor the indigenous people of this land, in particular the Nimiipuu nation who were the original stewards of this land. And they are our neighbors today, living, loving, and working in this region still. We give thanks for them and commit to living as good neighbors with them. May we always remember that the Earth does not belong to us, it belongs to God, and we are all relatives in this life, called to be stewards together of God’s creation. Help us learn from past mistakes, and be instruments of justice and peace for all nations and tribes and people in the world. – The Rt. Rev. Gretchen Rehberg

Blessings Shirin. This “land acknowledgement” appears in our weekly worship bulletin throughout the Episcopal Diocese of Spokane. I have sadness that it is rarely talked about, yet it appears before us regularly. Thank you for your reminders. God bless you.

Thank you for sharing this acknowledgment and your church’s experience with it. It’s a good starting point and the conversation is important too. At our church it’s included, then forgotten, then we ask and it comes back… thank you for your support and awareness.