My phone has been acting up lately. The most frequent—now daily—problem has been a spontaneous disconnection with the phone service. It doesn’t tell me that it’s no longer accepting calls. I’ll look at it at some point and see “No Service.” If I’m in the house, I’m on Wi-Fi and still getting data, which means folks would have a way to get through to me—if they knew to text or email rather than call. But it’s concerning, especially since this is my only phone, for both business and personal use.

I’ve investigated and found a reset, but it doesn’t always work or last long. I’ve also seen Apple acknowledge that they’ve been slowing apps to deal with battery issues in older phones…but this isn’t that kind of issue, as far as I can tell. I’ve tried to discern patterns, but no luck so far…although the latest possibility is that there’s a tiny void in coverage—centered around the right side of my office desk….?

Meanwhile, I did decide that perhaps one issue might be an overload in the photo-storage department. While Henry has downloaded tons of music to his phone, I’ve used this phone as my camera in a lot of circumstances, especially low-light circumstances, over the past few years. Henry bought me a tool to more easily download all those photos, and I used it this week to lighten my camera’s load. 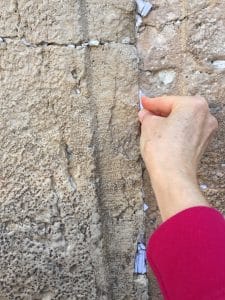 I was surprised—but not shocked, as Henry was—to discover that I had collected over 7,000 photos on my phone (including almost 600 from our trip to the Holy Land, exactly a year ago; here, I’m tucking a prayer into the Western Wall). I’m hoping that by removing most of them to my offline backup files, I will free up space and energy for my phone to respond more nimbly with what I need it to do. I hope this partly because I don’t want to shell out for a new one, and partly because I don’t like some of the features of the newer models. (I sometimes wonder if I’m approaching “old fogey” in some areas of my life!)

This lightening of the load has also been taking place in other areas of my life. I’ve cut back on the wisdom emails I receive. There’s a lot of good stuff out there on the Internet—and I hope I’m contributing to the abundance!—but I do need to focus on the generation of material more than on consumption. My bookshelves are also full to overflowing, despite culling books whenever we move…but that’s probably another entire reflection, in and of itself…!

I found myself thinking of the phone as getting older and not always able to keep up with the newest and latest versions of things. Am I also weighed down by the newest and latest? I know I’ve felt drawn back to scripture—to my roots in the Gospels—ever since that trip to Israel. So I am praying: Holy Spirit, where do you desire me to focus my attention?