Can We Disappoint God?

I’ve had some interesting conversations over the past few weeks, around questions about balance, rest, creativity, commitment, responsibility, practicality, and trust. That’s quite a list—and all of it is connecting with the question of what I’m choosing to bring forth into the world, in terms of spiritual offerings. I’ve talked frequently in the past about the idea of a podcast on hope and, as I’ve continued to faithfully show up for what I thought would move that idea forward, it just isn’t happening.

I’ve struggled with that. I’ve had this idea that it’s my responsibility to make it happen since God seemed clearly to be giving me the idea. The problem comes with the fact that I honestly don’t have passion for the idea at this point. When I look at my list of possible projects to work on, there are at least a dozen that I’m more excited about. It’s not just because podcasting would be new territory. There are other factors involved, including my paid editing workload. I just don’t see how I would move forward with it at this point.

And that’s led to a lot of guilt. As I said, I have this sense that I’m supposed to follow every trail of breadcrumbs that God lays down—but what if that isn’t the case? What if our minds are constantly pulling ideas forth from the endless creativity of God’s universe, and we get to choose what we want to pursue? What if it’s like walking up to a peach tree and choosing a certain peach, luscious and ripe, while having to leave dozens of others behind?

When I was at Weird Church Camp, I had a conversation with someone who shared with me some wisdom from Elizabeth Gilbert’s Big Magic. The wisdom is that ideas “seek the most available human collaborator” and move from soul to soul in the process. This could mean that I can speak an idea—help to “get it out there”—but then let the idea go and trust that it will find its way to someone who is more available to take it on. This could also mean that just having spoken about it, repeatedly, on this blog, could be what I am called to do—that someone else will pick up this idea here and run with it.

Of course, that could also be a way to avoid responsibility for doing what I am called to do in the world—and there have been seasons in my life when that might have been true. I often have worried that I’ve disappointed God by not following through on things. I have feared that God would somehow stop “giving me ideas” or “building up my creativity” because I wasn’t “following through.”

But I don’t believe that it is true now, because something else has risen to claim my focus at this time. This something has been incubating in me—and manifesting, off and on, in my life—for nearly twenty years. This idea embraces the Ignatian type of Imaginative Prayer and first began to evolve when I developed a Quiet Day for my local church, entitled “The Advent of Jesus through the Eyes of Mary.” Over time, I’ve led that quiet day in various places, then expanded upon it to embrace the stories of others who were involved in the Advent and Christmas story.

This newest incarnation involves an online retreat that invites participants into the experiences of those surrounding Jesus during the season of his Incarnation. I’m calling it The Advent of Jesus through the Eyes of Others and I invit 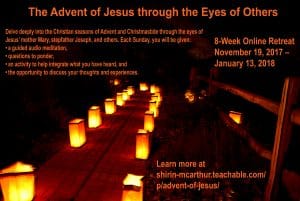 e you to click on the title (not the image) and learn more about it. I’m excited to have figured out a way to share these stories with you—these stories which have been seeking incarnation, in and through me, for years.

This is exciting! I also wonder: Was God disappointed that it took almost twenty years for me to reach this point? Or was it enough that those quiet days and prior retreats were shared, when they were shared? I also find myself wondering how much is enough. Am I too hard on myself? Is it even possible to disappoint God?

What do you think?

You offered to share some ideas for opening the November session if people bought in to the idea of a little catch up/ recap. Do you have a minute to share via email?

Barbara Sent from my iPad

I have done so, Barbara. I hope it’s helpful!

Hi Shirin. It’s good to read of your developments and insights. While I do believe that “disappointing God” is a viable human metaphor for some of our impact on the Holy One, it’s very hard for me to imagine that God is disappointed with you and your discernment and decisions. When I was a student in theological seminary, I devised the phrase “discernment by aversion” to describe experiences comparable to yours with the podcast. Maybe ‘aversion” is too strong a word for your feelings about the podcast, but your alternative commitments (including the beautiful online Advent retreat) do appear to be the result of discernment. You put some possibilities in the sieve, shook it, and the podcast fell through. But other important nuggets stayed in the sieve and receive your attention. Not least of them is the skillful, professional, and deservedly paid work your do as an editor. “Following through” on the podcast might have meant forcing yourself through the sieve and neglecting some of the good work you do for money. As for ideas, I once had a writing teacher who said, “Ideas are cheap”–as in, a dime a dozen, not hard to come by. It’s not an exalted view of creativity, but it does suggest more ideas will come, many will fall through, and a few will be developed. I, for one, admire the fact that you’re not trying to do it all.

Ah, Rachel, thank you so much for this thoughtful reply. I like the idea of “discernment by aversion,” especially if it’s less “freighted” and more neutral…which I think it can be. The Ignatian idea of “indifference” as detachment, as in choosing not to invest energy in something, comes to mind.

Thank you also for the image of a sieve–I really do like that one, and it fits very well. Yes, ideas are cheap…making something out of them takes more time and energy–and will produce fruit. Not all seeds produce fruit. Some become compost for the next season.

Thanks also for supporting my not trying to do it all! I think many of us could do well to practice this: Balance!