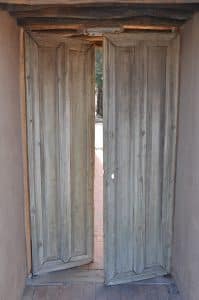 Recently I was driving to meet with my spiritual director and found myself thinking about liminal space. The word “liminal” comes from the Latin word for threshold or doorway, marking a transitional moment between one phase of life and another. Classically, liminal space was the middle stage of a religious ritual, when someone had passed beyond the old way of being but had not yet fully embraced or integrated the new.

Definitions of liminal space talk about disorientation and ambiguity, and it was that element of ambiguity that had really claimed my attention. When I shared having felt like I was in liminal space, driving to meet her, my spiritual guide asked how I would describe liminal space. What came forth was a sense of being at the threshold between the known and the unknown.

I was feeling liminality in the car—45 minutes is a long drive to meet someone, but also a good opportunity to reflect upon my life and my relationship with God—but I was also feeling it at that moment in my life. I was inhabiting a space, in those 48 hours, between our granddaughter’s visit and my departure for ten days in Colorado, which would include my stint as a spiritual director for Weird Church Camp. While I had both daily chores and freelance work to fill those hours, I still had a sense of dwelling in that doorway, between the now-known experience of our granddaughter’s visit and the anticipated, but yet unknown, time in the mountains.

As I sat with my spiritual director, I found myself wondering if Jesus inhabited liminal space on a more regular basis—in that sense of consciously recognizing the doorway between the known and the unknown, the old and the new. What would it be like, to wake each day, holding the past as “known” and the future as “unknown,” being consciously aware of the gift of standing at the threshold with every activity, every encounter, every conversation? It felt to me like an exciting opportunity, to conceive of life this way on a more regular basis.

I thought also of a Lenten poem I wrote last year, about the Dalai Lama’s ability (as I’ve heard it expressed by others) to be fully present to whatever conversation he inhabits. What if we treated every conversation as liminal space—in that sense of welcoming the unknown, embracing the ambiguity, rather than presuming we know where the conversation is going or spending our mental time figuring out what we will say next rather than listening to what is actually being said by the other? What if we treated every encounter as a doorway into a new stage of our own life? It would allow dialogue to be truly transformative—as so many of Jesus’ conversations were. I would like to believe that Jesus brought that perspective, that liminality, to each encounter, and that we can too.

Certainly that’s one element of the attitude and perspective I want to take with me to Weird Church Camp. As I write this, Camp is in the future. As you will read it, Camp will be in the past. Liminal space. Already, but not yet—which is also one of the ways that Christians like to talk about Jesus’ understanding of the Reign of God.

How do you think of liminal space—or, if this is a new concept for you, how are you thinking of it now, based on this reflection? Where/when/how have you encountered it in your life? How might God be calling you to embrace liminality in your own life?