Unintended Consequences in Our Transport Industry 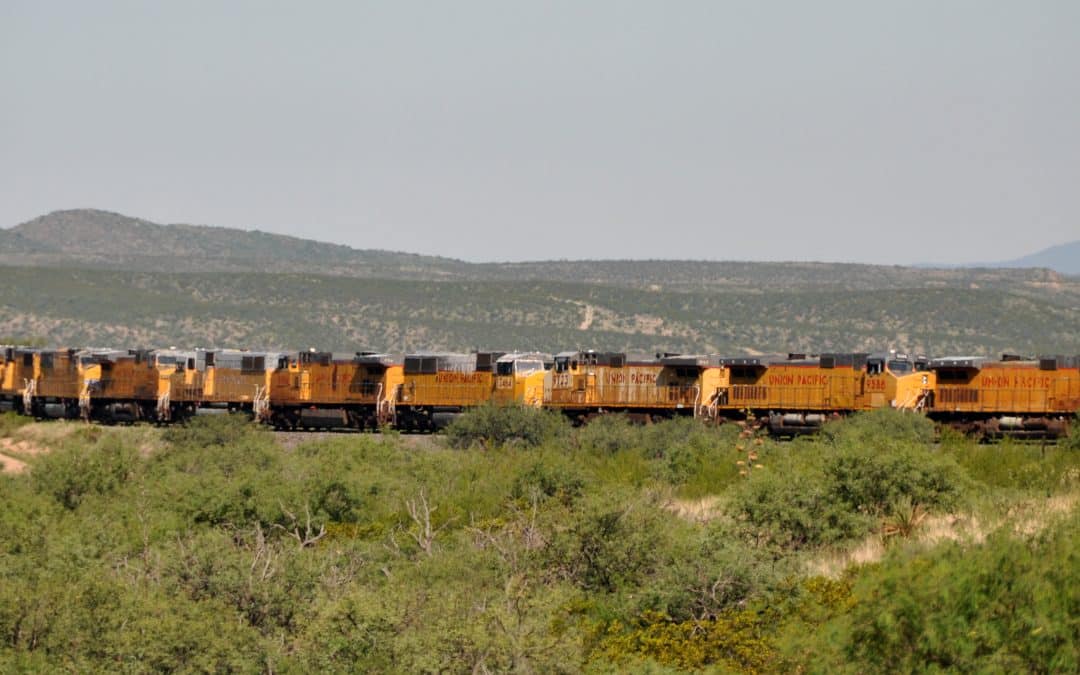 Last weekend I returned to Silver City for a few days. I visited friends, hiked in the mountains, and gave a presentation of some photos and stories of our time in Israel at the church I used to attend.

On the drive from Tucson to Silver City, I passed this amazing sight. It’s hard to tell from this photo, but there are almost three hundred train locomotives, stored end-to-end, on an unused siding alongside the Interstate. Reading up on this, I discovered that the Southern Pacific Railroad is using “Aridzona” to store unused engines. Our state’s humidity is generally very low—except during the current monsoon season—making it an ideal place to mothball both airplanes and locomotives.

So why, in an economy that’s supposedly booming, are so many engines parked here? It turns out that another of the unintended consequences of the success of fracking natural gas has been a decline in our railroads. Railroads have, for decades, been used to haul coal. In fact, coal has historically been the railroads’ largest single revenue source. We know—from our contentious political election cycle last year, if nothing else—that the coal industry is in serious decline. Natural gas is much more efficiently transported via pipeline, and the increase in oil pipelines as well (including the incredibly contentious Dakota Access Pipeline) had also cut railroad oil transport by 22% in 2016.

Railroads built this country. My paternal great-grandfather worked for the railroad, and the pursuit of trains still drives many of the details of my parents’ vacation plans. But things are changing in this country. The rail lines that used to form the backbone of our nation’s transportation industry no longer do so. Transportation now takes place via pipelines, power lines, and—in this increasingly service-based economy—internet lines.

I know this is a rather big shift, but I see a similar transition taking place in the church in this country. I’m currently reading a book called Weird Church, which discusses the decline in the institutional church, in America and around the world, and proposes a rather radical response. It is fact that many in our younger generations are not keen on the idea of belonging to one church and giving money to support a building and programs and clergy salaries. They are still curious, even desirous, of a spiritual life and a relationship with God, but the ways that worked for prior generations don’t work for them.

So it’s time to discover new ways to “transport” Christianity to the spiritually hungry. In their exploration of what it means to be church these days, Weird Church leaders propose returning to the roots—which is what the word “radical” means, at its root(!)—of Christianity. They pose a question that I really like: What did the disciples do the day after Pentecost? Having been inspired by the Holy Spirit, these earliest Christians moved into “liminal space,” where “the Jesus movement began to spread and to innovate on the fly; creativity came to life.”

There are many ways in which Christianity is being revitalized in this country—but most of them don’t look like the church we’re used to seeing. Christianity is being “transported” in new ways, and I am excited to be a member of a team of spiritual directors that will be gathering with Weird Church practitioners at Weird Church Camp, the end of this month, to share stories and experiences and listen for how the Holy Spirit is calling us all to innovate in this day and age.

I invite you to pray for us, as we prepare for camp and gather in community, like the early Christians, to revision what church looks like in a constantly changing world. How are we called to transport Christianity to the spiritually hungry today?

How are you called to transport Christianity to the spiritually hungry today?

Wow! I look forward to hearing about this when you get back! Now that I’m leaving Heartland, I’m wondering what “new” might be opening up for me to be involved in??? Blessings of guidance and goodness! How exciting! Sally

Yes, indeed…I had not thought of that when we talked this morning, but truly perhaps Spirit might be working on something new and exciting for you…! I look forward to a conversation….

“Weird Church” as a book/movement is new to me, although I’ve been thirsting for an intentional interspiritual community/house “church” for some time. I’ll so look forward to your reflections after the gathering, Shirin. And thanks for the info and image of the engines — my subconscious incorporated it all into a dream last night… I’m still working on it…

You’re so welcome, Jan. I’m glad that those images and ideas spoke to you and sparked a dream…I pray it leads you along interesting, Spirit-driven paths….