Bugs on the Bumper

Earlier this summer, Henry and I traversed this country by car. We drove from Tucson to Boston and Henry returned via the southern US, making a number of genealogy-related stops along the way. It had been years since I’d been on a road trip this long—since we moved from Boston to New Mexico in 2006, in fact.

When I was a child, we took a number of summer road trips: mom and us kids in our blue pickup truck with camper shell, camping our way across most of the contiguous United States over the course of my teen years. This year’s trip was different in a number of ways. For one thing, no one was enforcing seat belt laws when I was a kid, and we bounced around on sleeping bags and a built-in shelf in the back of that covered pickup truck, communicating with our parents through the sliding window in the back of the pickup cab. I find the front seats of our Altima quite restrictive in comparison!

Another thing I don’t remember is all the bugs we killed with our car. Perhaps they were there, and my parents diligently cleaned them off the windshield every time they bought gas, as I did this year. But one night, as we were driving west of Cleveland, I actually thought it was raining because of the volume of bugs hitting the windshield! 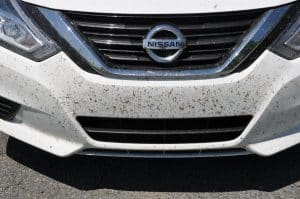 One of the songs we heard on the 70s radio station during our trip was “Convoy,” that hilarious song about truckers that includes the reference to cops gathering as thick as “bugs on a bumper.” As you can see here, our car illustrates that image quite well. Henry commented at one point that there might be a blog post in that, and I pulled out my laptop to see what developed.

What initially came to mind is that, if I were Buddhist, I’d be in real trouble, because of their reverence for life and desire to do no harm. Then I thought about how I, as a Christian, prefer to do no harm, either. In fact, reverence for all creatures is behind the robust environmental ministry undertaken by one of my former spiritual directors, Margaret Bullitt-Jonas. She and many others are advocating for the earth because way back in Genesis we were told by God to care for the earth—what Richard Rohr calls “the first Gospel.”

Driving across these United States also really helped to connect me with the states more fully. I had many hours of opportunity to admire this land, to appreciate its variety, its many forms of lush greenery, the picturesque old buildings and innovative new ones. I found myself giving thanks, multiple times, for the opportunity to travel and for the beauty of creation.

But that travel comes at a cost. We consumed quite a bit of fossil fuel on this trip and we killed an awful lot of tiny creatures. (We also saw a lot of larger roadkill, ranging from squirrels and raccoons to a startling number of deer.) It reminds me that our impact on our environment is never straightforward. Every choice we make, every pleasure we take, has consequences. I don’t regret our trip…but it does make me think seriously about how we travel, and how I might somehow atone for that excess here at home. One way I know I do that is through working at home. At least I have a zero-emissions commute!

When have you taken a road trip? What did you notice? Did you remember to give thanks? How might you give thanks for creation by making conscious choices to atone for your use of fossil fuels?