I feel the need to begin this post by saying that I don’t know why I feel compelled to write about this topic at this time…but I do. I do so trusting that the Spirit will bring it to the attention of whomever needs it, and that the rest of you will find wisdom here as well…. 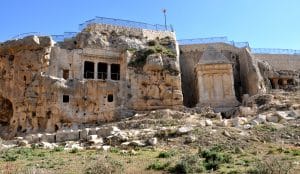 Henry and I saw a great number of tombs during our time in Israel. Most of them were in the Kidron Valley, which wraps around the east and south of Jerusalem, below the Temple Mount. The Kidron Valley is outside the city walls and thus became a primary burial ground during most of Jerusalem’s history, including the Second Temple Period—the time of Jesus.

The Kidron Valley was also the most direct way to get from the Mount of Olives into Jerusalem. When Jesus was escorted from the Garden of Gethsemane to Caiaphas’ house, on the night of his arrest, he would have walked with those soldiers through the Kidron Valley. Imagine walking through a cemetery at night, with only the soldiers’ flaring torches, and perhaps the moon and stars, to light the way. That’s basically what that night was probably like.

Walking through the Kidron Valley in January, following that same journey (in sunny daylight!), we talked about Jesus describing the Pharisees and scribes—the learned leaders of his day—as “whitewashed tombs.” Jesus was very explicit in his opinion that, like those tombs, Jerusalem’s religious leaders looked bright and clean on the outside but their minds and hearts were filled with the nastiness of death. It’s certainly a very graphic image; Jesus excelled at using memorable images to get his points across.

But have you ever wondered why Jewish tombs were whitewashed? It turns out that there’s a very specific reason, and it has to do with walking through the Kidron Valley and other “valleys of the shadow of death.” Ritual cleanliness was very important for the Jewish people, and there were a lot of rules about what priests and other religious leaders had to do to avoid defilement. Leviticus outlines many of these rules and the Mishnah goes into great detail about how religious leaders are to avoid defilement by remaining a certain distance from a dead body or an enclosure (tomb) in which a dead body is found.

This is certainly a far cry from the way we handle dead bodies in Christianity today. Our priests and pastors (and the rest of us) enter funeral homes and even touch dead bodies at open-casket wakes and viewings. We celebrate the lives of the dead in churches, with the coffins right beside us. But we still “whitewash” those caskets, and our tombs—for a different reason. We dress up our dead, reconstructing their bodies if their deaths were messy. We then encase them in gorgeous, silk-lined caskets, and erect stately monuments to our loved ones in modern cemeteries which are usually found within our city limits.

But we still avoid defilement—again, for a different reason. We whitewash illness instead, these days: the medical reports, the facts we share with family members, the hospitals and nursing homes in which we hide away those who aren’t healthy enough to be out among us…or those who are dying. I find it very telling that we have this cultural sense that even non-contagious illness will defile us, at some level, and thus we seek to avoid it whenever possible. As a society, we’ve given our elders the sense that they are a defilement to our busy, youthful lives, until they are reaching the point that they’re even paying for the privilege of hiding themselves away in “LifeCare” communities that will allow “professionals” to care for them in their final years of life, and death.

I am glad that Henry’s Aunt Ada died in our home. I’m glad that she wasn’t shut away in a nursing home for the final year of her life, when she could no longer safely live in her own home. It wasn’t easy, but it was good, in that deep-down, Spirit-blessed sense of good. We weren’t defiled by her illnesses, or her death. I think we both grew, psychologically and spiritually, because of her dying in our midst. I wouldn’t whitewash that experience.

I invite you to prayerfully consider what you might be whitewashing in your life—finding ways to avoid those things so that you don’t have to address them, to live with them, to acknowledge their reality in your life. What would Jesus say about it?

Wonderful… Have you read Being Mortal, by Gawande?

I have read parts of it and am familiar with the issues, yes. I’m glad my post spoke to you!

I remember Aunt Ada and the one-time visit with her. You and your husband were so kind to her. Now that I am aging (81) and becoming more dependent on others, I find the kindness of family or even a stranger so renewing. God’s peace be with you. Thank you for all you write and all you are.

You are welcome, Marcia! It was an honor to provide that kindness. May God’s peace be with you and all who serve you in this season of your life.

I appreciated your words about modern Christian priests and pastors who touch a dead body. WhenI read “religious leaders are to avoid defilement by remaining a certain distance from a dead body” I thought of that immediately. It would be a defilement to avoid touching a dead body, if one were to bring prayers at the time of death. (I have offered those prayers, and know that the first hour or two after death is a very sacred time.)
As for folks being in nursing facilities, I feel both ways about it. It’s beautiful, even if difficult, when loved ones can care for an elderly person right to their death. Of course, not everyone is equipped to do this, such as an equally elderly spouse, or in the case of someone with Alzheimer’s or with such debilitating illness that pain meds require movement to a respite house. In some instances, the relationship needed for that kind of nearness (physical as well as emotional) wasn’t properly tended during one’s lifetime, so there isn’t anyone equipped in that sense who can offer the care. But in those times when a close friend or respectful and caring family member can be the supporter to the end, that is truly life giving and to be celebrated.

Thank you, June, for your thoughtful response. Yes, not everyone can accommodate an ill or dying family member in their home; I was thinking more broadly of the stigma against it, rather than the individual restrictions that might make one family or another choose differently. Thank you for bringing that out into the open. We need to have these types of conversations to keep ourselves honest about all of life.

I’m glad my words spoke to your own life experience.