The big celebrations in the church’s liturgical year are now over. Jesus has died, is risen, and has sent his disciples out into the world to proclaim the Good News of God’s abiding and universal love. But we shouldn’t feel disappointed to be entering what the church calls Ordinary Time. This is when our real life in Christ truly begins.

Take, for example, the story of the “Gerasene demoniac” in Mark 5. This man lived in the hills on the eastern side of the Sea of Galilee, in what today is called the Golan Heights. Gerasa was part of the Decapolis, ten cities in Palestine that formed the eastern frontier of the Roman Empire. 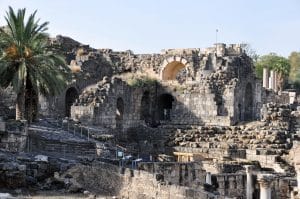 (In January, we visited these excavated ruins of Beit She’an, aka Scythopolis, another city in the Decapolis.)

The “demoniac” is not named in scripture, but rather described by his affliction: He was possessed by many demons. Today we might call this some type of mental illness or schizophrenia but, in Jesus’ day, demons were understood to be the cause. Jesus meets this man right where he is: in the midst of his demons. Furthermore, Jesus immediately addresses this man’s defining issue—those demons. Jesus commands the demons to come out, negotiates with them about where they would go, and sends them off (to their deaths).

Naturally, this man—who remains unnamed—is thrilled with this turn of events. I can imagine him going immediately to the nearest Roman bathhouse for a good scrub, the trimming of his hair and beard, and the donning of some new, clean clothes. We know that he then hangs around with the disciples, continuing his healing process at the feet of Jesus. I’m pretty certain that he is enthralled by this miracle worker who has shown him a love of God which is deeper and broader and more healing than he could ever have imagined.

Also, naturally, this man wants to go with Jesus when he returns to Galilee. But Jesus refuses. Instead, Jesus gives this man his commission: “Go home to your friends, and tell them how much the Lord has done for you, and what mercy he has shown you.” This man was not called to a life of itinerant ministry as one of Jesus’ disciples. He had his encounter with Jesus, and he was transformed through that encounter, but then he had to go home. He had to take himself home and spread the Good News that had transformed his life.

For most of us, following Jesus doesn’t mean taking up an itinerant ministry. It means going home, to the life we know and the people we know, and proclaiming Jesus’ message there. For this man, it meant returning from the Sea of Galilee to the cities of the Decapolis and spreading the Good News there.

The realm of God begins with us, right here, right now—right where we are. Once we encounter Christ, we are not called to follow him around for the rest of our lives. Even the disciples only got to spend about three years with him. Then they also were sent forth, commissioned to spread the Good News.

What is your home—your Decapolis? What is your commission? Where, and to whom, are you called to spread the Good News of resurrection, of new life, of the love of God which is deeper and broader and more healing than you could ever have imagined?