Dying to Anger and Rising to Love

It’s still Eastertide, although many of us have moved on, in our hearts—back into “ordinary” time. Sometimes, though, I still find resurrection floating through my head in different ways. Other times, I find myself returning to holy week and the lessons I learned this year during those holy days.

One lesson that caught my attention during holy week was that Jesus stopped being angry once he was arrested. He was angry in the Garden of Gethsemane, when his disciples slept, and then when they sought to fight. But once he was arrested, it was as if the fight, the anger, drained out of him. He became completely passive to what was happening. Furthermore, he doesn’t seem to regain his anger when he returns, resurrected. Something happened, in the harrowing of hell or the reconnection with Trinity, which enabled him to be firm, strong, loving…and no longer angry.

I wonder: Is there a place for letting go and letting what’s unfolding just happen—even if it leads to death? Did Jesus know, deep in his heart, that even his death would serve a larger purpose? Did he recognize or remember that every action we take speaks loudly—louder than a torrent of words possibly could?

We used to say, “Sticks and stones can break my bones, but words can never hurt me.” Now all we seem to do in America is bludgeon each other with words. We are dying under a barrage of words. Video games also provide a way to live out the fantasy of doing violence to each other, and ourselves, over and over and over, but using words as weapons is perhaps a more insidious crime to all of Creation. 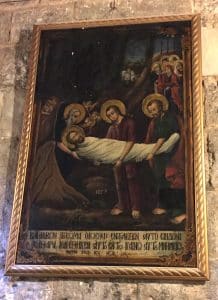 My mind also keeps returning to Joseph of Arimathea, buying a linen shroud and wrapping Jesus’ body in it (as illustrated in this image of a painted in the Church of the Holy Sepulcher in Jerusalem). I think of the Shroud of Turin, which is not from Jesus’ time, but at this point is probably well steeped in holiness simply from believers’ association of this fragile cloth with Jesus’ body. It’s holy, as we are holy, having been steeped over and over again in Jesus through the bread and wine of Eucharist.

There is so much more to faith than the journalistic facts. We must move beyond literal words in this culture. We must reconnect with the deeper truths that infuse meaning in our lives. We must understand that praying in a place makes it holy: invites the Trinity, the Risen Christ, to infuse this fragile, suffering earth with resurrection light and eternal Love.

How will you issue that invitation to the Risen Christ today?