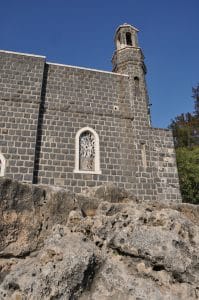 One of the places that touched me most strongly in the holy land was this rock, on the shores of the Sea of Galilee (also called the Sea of Tiberias and Lake of Gennesaret). This is the rock, according to tradition, where Jesus appeared to Peter and half a dozen of his other disciples, following his resurrection (this story is recounted in John 21). For me, touching this rock, leaning against it, I could look out upon the Sea of Galilee and imagine Jesus doing the same.

I could also imagine Jesus and Peter, sitting on this same rock, after breakfast, talking about love, and about tending Jesus’ flock. Peter has got to realize, by now, that things are different. I don’t know whether Jesus looked different or sounded different, but the very facts of denial, death, and resurrection had changed their relationship. Peter looked at Jesus differently, and I imagine that Jesus, following the crucifixion, viewed his disciples differently as well.

In Matthew 16:18, Jesus says, “I tell you, you are Peter, and on this rock I will build my church.” The name Peter means rock, so Jesus is playing with words, but also tapping into an underlying truth. He knows that Peter is impulsive and passionate, always ready to speak and sometimes quick to argue. But he also knows that this deep passion and facility with words will be important gifts that a religious leader needs. He reminds Peter to balance these gifts with love for the disciples that will come under his care.