The Jordan River in the Holy Land is 156 miles long, so there’s a lot of territory to cover when it comes to determining where John the Baptist might have based his baptizing ministry. The Bible does give us hints, however (John 3:22–23) and, over time, tradition solidified the location were John was baptizing. Churches were built on the east side of the river, because John 1:28 also speaks of John the Baptist baptizing at “Bethany across the Jordan.” 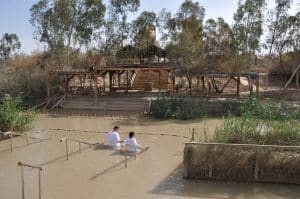 After the 1967 war, the west bank of the Jordan River, across from the older “traditional” baptism site, was reopened to pilgrims, and that is the place we visited in January. As you can see here, floating cordons in the river demarcate the permissible area for baptism on each side, with the center of the river forming an international boundary. An ancient church can be glimpsed through the trees on the eastern, Jordan side.

I’ve found myself thinking a lot about the need, for many years, to compromise on the “baptism location” along the Jordan River—whether east side or west, north or south. What once was one group’s territory now belongs to another. Access is restricted, then granted, then restricted again, with the ebb and flow of war and its resulting territorial divisions.

That is certainly true today in the desert southwest, my “home territory.” The Gadsden Purchase in 1853 was the last substantial territorial acquisition in the continental United States. Its boundaries divided the territory of the Tohono O’odham people, who originally ranged freely over the resulting international border with Mexico but today are severely divided by the American government’s increasingly impenetrable and hostile border.

Every change in a territorial border creates consequences for those who live along it. This has been true ever since nomadic people began to settle down and claim territory as “theirs” rather than understanding that the earth is a gift, freely given to all by a generous and abundant Creator. In the Holy Land, people figured out how to compromise, accessing the river where they could in order to keep their rituals and traditions alive.

Many people, around the world and over countless generations, have “left home” because of territorial battles that divided or destroyed their homelands. They compromised or abandoned their connection with a certain place in the interests of safety, security, a better life. Has this happened in your family’s history? Where in your own life have you had to make compromises, whether in regard to a geographical location or in a less literal sense?

Have you maintained some sort of connection with certain locations—perhaps your “hometown,” or home territory? Are there places that have developed particular spiritual meaning for you because of a pivotal event—a literal or spiritual baptism? Do you revisit them? How would you respond if you were suddenly told that such holy land was now off-limits?

I invite you to pray for all those who are cut off from their holy lands, in one way or another, and must make compromises to keep their personal and communal traditions alive.