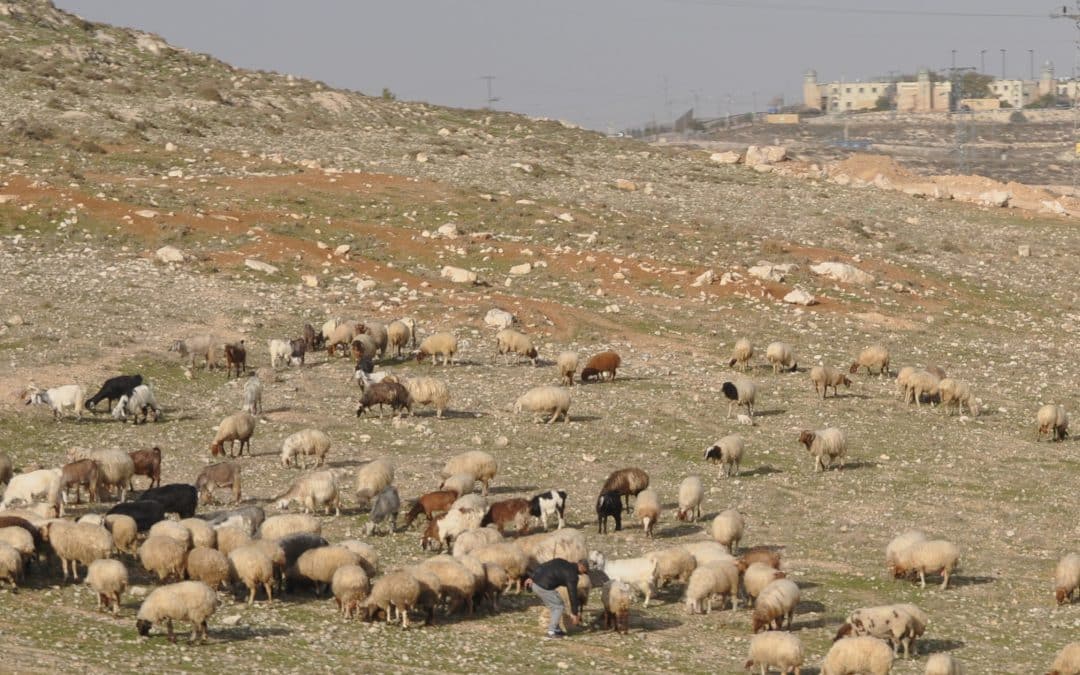 You’ve heard this phrase, haven’t you? “Break a leg” is a good-luck wish for actors in the theater industry—evidently because it was considered bad luck to wish them “good luck” before they went on stage!

That phrase took on new meaning for me while I was in the Holy Land. Perhaps you’ve seen pictures of Jesus, the Good Shepherd, with a lamb or sheep riding across his shoulders? That picture would be illustrating the parable Jesus tells in Luke 15:4–6:

Which one of you, having a hundred sheep and losing one of them, does not leave the ninety-nine in the wilderness and go after the one that is lost until he finds it? When he has found it, he lays it on his shoulders and rejoices. And when he comes home, he calls together his friends and neighbors, saying to them, “Rejoice with me, for I have found my sheep that was lost.”

It turns out that there’s more to this story—at least in terms of the sheep being laid on the shepherd’s shoulders. Our guide told us that traditionally, when a sheep would tend to stray, the shepherd would literally break its leg. Then he would bind up the leg and carry the sheep on his shoulders as it healed. He would feed the sheep and bond with it during that healing time, so that the sheep would come to associate the voice and the smell of the shepherd with food and safety. This would keep the sheep from straying, even after its leg had healed and it was again allowed to run free.

Somehow this leg-breaking didn’t make it into all those cozy paintings of the smiling, fair-haired Jesus, effortlessly carrying a lamb or sheep across his shoulders. That lamb or sheep would be a heavy, hot, uncomfortable burden (think of all that wool against your neck, even in July!), day after day, week after week. That sheep would want to get down, would initially probably hate the shepherd for what he had done. That sheep wouldn’t understand why the shepherd had broken its leg—or perhaps even why its leg was hurting in the first place.

Today, especially in America—where cruelty to cute and cuddly animals is often treated with more contempt than child abuse—it’s very hard for us to imagine breaking the leg of a cute, wooly white lamb or sheep. But life was different then—and still is, for the Bedouins in the Holy Land. For starters, there were no fences to keep the sheep from danger. This was why the relationship with the shepherd was so vital. Psalm 23 describes how sheep looked to shepherds to guide them (with that rod and staff) to green pastures and still (as opposed to swift, dangerous) water. Any sheep that didn’t stick with the shepherd was in danger of falling off those paths of righteousness (and breaking much more than a leg) or being caught and eaten by hungry wild beasts.

Jesus concludes his parable by saying, in verse 7, “Just so, I tell you, there will be more joy in heaven over one sinner who repents than over ninety-nine righteous persons who need no repentance.” Jesus is telling his hearers that, in just such a way as this (leg-breaking and all), there is joy in heaven when sinners who have gone astray, are in some way broken, then carried as they heal so that they can learn—“for their own good”—to respect the voice of the shepherd.

How many times can you remember a spanking from your mom or dad, or some other form of punishment, that was “for your own good”? As children, we sometimes didn’t get it—but now, as adults, we do. This is one way in which we differ from sheep, which most likely won’t ever have the capacity to understand why their leg was broken. We do, and perhaps we can even understand that there might be times in our lives when we are broken in ways that make no sense at the time, but eventually lead us closer to God.

One spring morning a few years ago, I danced off the edge of the rug in my office and broke a bone in my foot. Initially I was appalled and frustrated—especially since I had been worshipping God at the time! Over the weeks I spent in the boot, recovering from the break, I had to slow down and make many choices about how I spent my time. I also eventually realized that God might have been trying to get my attention—and that the time I spent with my foot up was indeed an opportunity to deepen my relationship with God in prayer.

Whether you’ve ever had such a literal break, or have instead been broken in other ways, I invite you to reflect upon and pray about the ways in which your Good Shepherd might have “broken your leg,” and how you have grown closer to your Creator as a result of that injury. Then take a moment to pray for all who might be in pain today, who might be squirming uncomfortably on the shoulders of the Shepherd as they learn to recognize his voice….

I always love to read your thoughts based  on various spiritual scriptures. I think we’ve all broken a leg in our lives which have brought us closer to the Lord.  For me, journeying with and through my son’s stroke at age 6 has been a real life changer. Some people when confronted with such a tragedy run away from God, but I relied totally on him then and even more so now. Maybe, I needed to be broken so I’d be constantly in the love and protection of the Lord.

Sent from Yahoo Mail on Android

Ah, Diana, thank you for sharing. I’m so glad that my posts are meaningful to you, and that you can particularly relate to this one. Yes, sometimes we think God is the source of our suffering, or wonder why God “let” it happen, when the reality is that God is alongside us all the way…. Blessings on your various brokennesses….