The Crime of Coexistence

The first Christmas was not fluffy. It was hard. Mary and Joseph were on the road, away from home. They were on the road because the occupying Roman authorities decreed that their census be taken in the husband’s homeland, rather than his current place of residence. If tradition is to be believed, Mary gave birth on her own, in a dark, smelly, cold stable in the middle of the night. She might not have understood about germs and the possibility of infection, but she would have understood many other kinds of fears.

The land of Israel was an urban crossroads between Egypt and Mesopotamia. All sorts of people traveled through the land—and wanted to control it, as the Hebrews learned, time and time again, over the centuries. During Jesus’ lifetime, the Romans were the occupiers, but in other centuries it was the Babylonians, the Assyrians, the Philistines. And yet…the Jews of Jesus’ time reserved their greatest hatred for the ones who were closest to themselves: the Samaritans.

The Samaritans were Hebrews who lived in what had formerly been the Northern Kingdom of Israel. Their territory was overrun and occupied by Assyria in 722 BCE and many Samaritans intermarried with the Assyrians and worshiped their gods. A century later, the Southern Kingdom of Judah was overrun by Babylonians, who carted away the Hebrew leadership into exile for seventy years. When those leaders were allowed to return, the Samaritans resisted their repatriation and the rebuilding of Jerusalem, while the returning Jews looked down upon the Samaritans as being of mixed race and having fallen away from the worship of the one true God.

Isn’t it ironic that we often reserve our bitterest hatred for those who are closest to us, but have made different choices in how to respond to the various challenges and oppressions in our lives? Think about the United States of America—which is now far-too-firmly divided (at least in consciousness) between the Red and Blue States of America. We are all Americans. Yet we reserve our bitterest hatreds for each other, rather than the Russians who might have influenced our political choices or the Chinese and Indians who have surpassed our technological capacity while we’ve been so busy fighting with each other.

Even Jesus had to learn about coexistence, and loving his nearest neighbors. He learned it from the Samaritan woman at the well (see John 4:1–41) and the Canaanite woman who begged him to heal her daughter (see Matthew 15:21–28). They both taught him that his wisdom and his healing power were available to all, that everyone needed what he had to give, and that everyone was worthy of receiving it. 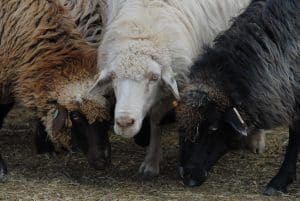 True, respectful coexistence is far too often considered a crime—by cultures ancient and modern. God became incarnate in Jesus in part to learn about the crime of coexistence and to make it into a virtue—and a necessity. Our country, our world, has seldom been in greater need of respectful, even loving coexistence. We must learn to love those who are closest to us—who might have made different choices, have different heritage and lineage, but are still our sisters and brothers in these United States of America.

Joy will only come to the World when we live as Jesus learned, and taught. How will you live the crime of respectful coexistence today, and in the days ahead?