This is not a political post—although it starts there. Please bear with me.

I read an article a couple of weeks ago that posited a number of things about why Trump won the American presidential election—and also stated clearly why current political, economic, and social modalities aren’t working (1) for the many types of people who voted for him, or (2) for those who sat out the election in disgust with the options available.

One thing that struck me in the article was a schematic that talked about four types of responses. Two were personal and two were communal. They say that three are fairly typical responses, and certainly I’ve been seeing them on social media and considering them for myself: personal rage, personal change, and reactionary movements. Rage and movements are reactions “against”; they seek to push back, they foster conflict and negativity. For many years, I have felt that this type of response is insufficient, but I hadn’t been as successful in articulating why, or comprehending another alternative.

A number of elements have conspired to make it crystal clear to me today. A few years ago, a friend and I were discussing the divisiveness that tends to arise in so many Christian organizations. He said something that stuck with me: Those who leave and start another church or denomination will not grow as long as they remain against those they left. They will only grow when they figure out what they are for.

This is the key to the fourth response articulated in the article:

What is called for today is a massive response that…focus[es] on evolving and transforming the collective. What’s missing most is an enabling infrastructure that supports initiatives to move into…co-creating change.

The fourth response is for. Yes, it involves turning our backs on what is against, rather than engaging with it (and thereby giving it additional coverage and power, as the media did with so many issues during the campaign). As I mentioned a couple of months ago, I’ve learned from Alison Kirkpatrick that there is a time and place for leaving structures that do not work for you.

But this fourth response is not just giving up and hiding away. The important thing is to figure out, when you leave, what you are walking toward.

This is a key for the process I’ve been engaged with since the election, and have talked about here on a couple of occasions. I know I need to take action, and I am discerning the particular nature of that action. I am getting closer to something concrete. I now know that it needs to be more than personal change (although that will continue, and I trust it will provide a firm foundation upon which to take action), and it needs to be collective. Whatever I do needs to foster and support systemic change and transformation—not in reaction to what has happened in this country, but because my sisters and brothers around the globe are in need of these transformative changes.

So what does all this have to do with Advent, and Jesus’ birth? Advent isn’t just about remembering an event that took place two thousand years ago. It’s also about preparing for Christ’s return. I’m betting that Christ is aching to transform the inequities in America today, just as he spoke out against them in Palestine. Why hasn’t he come again? This is rather simplistic (I’m sure there’s a lot more to it), but I believe it’s because he’s given us our marching orders and told us that transforming this world is our job.

Yes, sometimes Jesus spoke out against the powers and principalities of his day. But mostly he spoke for a radical, loving way of being and acting in the world: 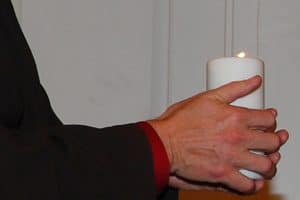 As we near the end of Advent, I invite you to take a good look at those four types of responses (personal rage, personal change, reactionary movements, and awareness-based collective action) and reflect on how you tend to act in the world. What are you for?

Yes, we must move forward, not get stuck in the muck and mire of what we hate, dislike or disagree with. What response to take? I’m deciding to join some others who are helping refugees getting off the plane in Tucson who have lost so much and feel so unwelcome. No home for a bed. Feeling unwanted stacked on top of so many losses. This may not even be the country where they will eventually stay. It’s an uncertain future for them. And landing in such a presently unbecoming place. We must take the high road to more than balance out the low road that’s too easy to walk on.

Thank you, this is such an unseen and important ministry! Blessings on your welcoming!

Check out Tucson Refugee Ministry. There are four different ways you can help. See http://www.tucsonrefugeeministry.com

Shirin – I look forward to reading about where you land in this process. I have not thought about it as systematically as you have, but as Cynthia Bourgeault has stated, I am waiting for it to unfold in the coming months. My reactions have been more spontaneous and so probably in some ways less effective, though still heart-driven. I am grateful for your work here and look forward to more of it.

You’re welcome Alison. We all walk this journey in different ways, as best as we are able. Your path and mine will both unfold in time…and while our methods may be different, only God really knows what “success” or “effectiveness” look like. I appreciate having you join me on the way….