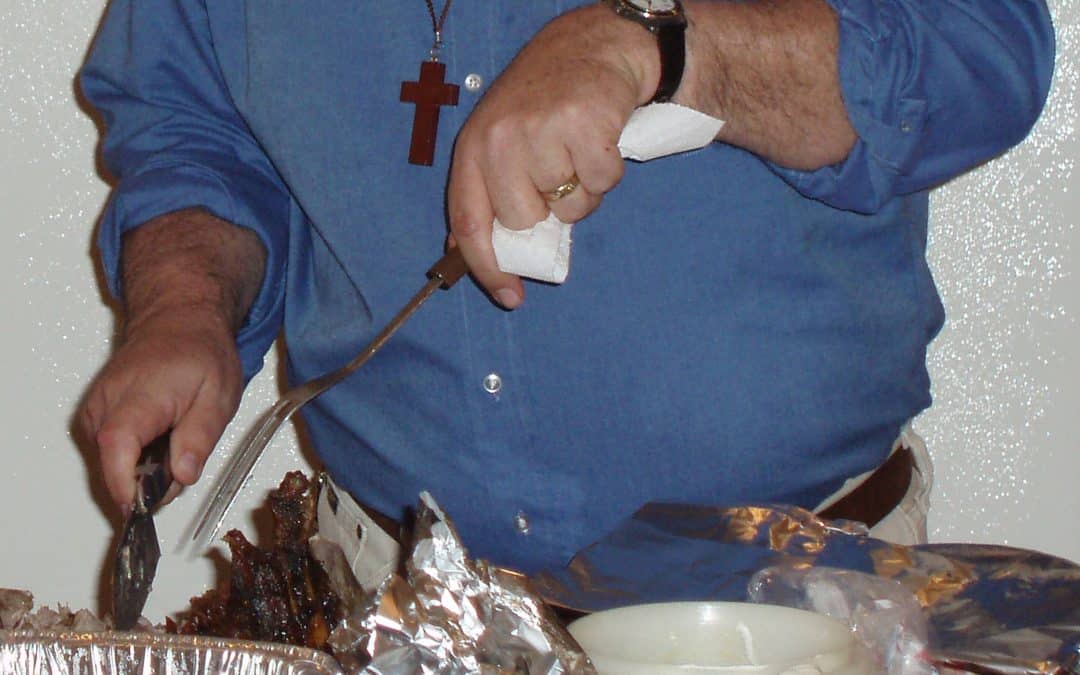 When I first met my husband, Henry couldn’t stand to eat turkey on Thanksgiving. This wasn’t because he hates poultry or is a vegetarian; as he likes to say, “I’ve clawed my way too far up the food chain to just eat vegetables.” It also wasn’t because of some childhood Thanksgiving trauma. Instead, it was because of turkey slinging.

What’s turkey slinging, you ask? No, it’s not the carnivore’s version of pumpkin chunking. It’s the family nickname for a tradition that Henry started when his two sons were small. Early on Thanksgiving morning, he and his sons would drive across the unusually quiet city of Boston to a small community hall where they would join a brigade of volunteers in putting together close to a thousand Thanksgiving meals for local elders and shut-ins.

Turkey slinging was a family affair and functioned like a well-oiled machine. Every age group had its jobs. The smallest children were assigned to place napkins or an apple or orange in each paper sack, while older children handled drinks, rolls, and plastic utensils. Busy moms and grandmas supervised the cooking of large trays of sweet potatoes, mashed potatoes, stuffing, green bean casserole, and gravy, while teens and young adults formed an intricate assembly line to fill carryout containers with dinner and divvy up portions of pumpkin pie. Still other adult volunteers were in charge of filling, labeling, and grouping bags and sending out teams of drivers across the neighborhood in cars jam-packed with the unmistakable smell of Thanksgiving.

By the time I joined in the fun, Henry’s sons were teens who had joined Henry on the brigade of turkey carvers who, over the space of three or four hours, dispatched around 35 carcasses and inevitably ended up wearing bits of skin and fat and reeking of turkey. After all the meals had been sent out and the hall cleaned up, we would take his sons over to their mother’s house, where they would happily devour turkey with all the trimmings, but Henry just couldn’t stomach that. Before I came along, I think he often just went home and ate nothing at all. After I appeared on the scene, we would have Cornish hens or duck, and later pernil, a Puerto Rican roast pork shoulder which is still our culinary contribution to most Thanksgiving feasts to this day. (It does a great job of smelling up the house as it roasts, without ever drying out like a turkey!)

These days we are not turkey slinging, but I still remember it fondly: the camaraderie in the unheated hall, the laughter and conversation, the small children toddling about, the smell (which never bothered me as I slopped mashed potatoes into containers!)—and the underlying understanding that every container we filled represented a gift of warmth and love and freshly cooked food on this bountiful national holiday.

We haven’t slung turkey in a while now. We left Boston in 2006 but, even before that, other priorities slowly usurped that hallowed tradition in our lives. Some years, I hadn’t even thought about it—but this year is different. This year I’ve been revisiting those memories, and reconnecting with the underlying need to give of my own abundance to those less fortunate than myself.

However, I don’t think I will seek someplace to turkey sling this Thanksgiving morning. This need feels deeper. It demands more of me; once a year is not enough. As I said last week, I’m on a quest for the right response to this serious shift in our American culture. Turkey slinging is emblematic, but not sufficient. Turkey slinging shines light on the journey, but it is not the goal. And so I will keep praying, listening, searching.

For what are you praying, listening, and searching in this Thanksgiving season? Are there family or cultural traditions that are speaking to you in new ways this year?