On Choosing Whether or Not to See

Henry and I have an adventure in our future—God willing. We will be traveling to Israel in January. For many years, Henry has wanted to visit the Holy Land, and now appears to be the time. (We actually signed up for another tour a couple of years ago, but unrest in the area caused the trip to be cancelled.)

In preparation for the trip, we have begun reading a list of books recommended by our tour leader. One of those is My Promised Land by Ari Shavit. Shavit begins by writing of his wealthy British great-grandfather, who visited the Holy Land in 1897 with a group of twenty other Jewish British citizens. Shavit states that his great-grandfather chose not to see that the land was already occupied by Arabs, because if he did not see, he could justify making this his home, and the home of his people, especially persecuted Eastern European Jews.

As I read this, I couldn’t help recognizing the parallels with the European colonization of America, and the continued fact of (mostly) powerful white men in this country choosing not to see the indigenous inhabitants. I think specifically of the Dakota Access oil pipeline, where Native Americans have been protesting the installation—invasion?—of this pipeline, running under major waterways and disturbing sacred lands in the Dakotas. Furthermore, one of the largest gatherings of Native Americans in history has been, for the most part, studiously ignored by the media in favor of continuous micro-analysis of the presidential election circus.

American greed (Do we really need Canada’s tar-sand oil—the dirtiest kind—when we already produce so much of our own fuel and should be investing in cleaner wind and solar instead?) is once again running roughshod over deeper concerns. Those with power are refusing to see others, whose claims to the land are older than our nation itself. The powerful probably believe that they can indeed ignore the natives, just as American leaders have almost universally done since shortly after Europeans began arriving on American soil.

We—as a culture—just don’t get it. And yet…this week, minutes after a judge denied the Standing Rock Sioux’s request to halt construction of the pipeline, the American government actually stepped in to stop work on a part of the pipeline, ask the pipeline-building company to “voluntarily pause” its work, and state the need for time to confront the larger questions about “considering tribes’ views on these types of infrastructure projects.”

This is epic. This is choosing to see. This is recognizing that there is more than one perspective on Holy Land, its history, and the people who care about it. This can be the beginning of major change—of actually seeing others and honoring their needs as well as our own. It is, indeed, loving our neighbors as ourselves—as Jesus said in “the” Holy Land two thousand years ago.

So what does all this mean in terms of my visiting Israel? It means that the Palestinians and the Native Americans make good corollaries for my understanding of at least some of the complex situation there. Jesus also lived in an occupied land, where the Romans, for the most part, did not choose to see the Jewish people. And yet…Jesus told his followers to love their neighbors as themselves. I imagine that he meant all their neighbors—even those who did not see them, or love them back. If there is nothing else that the current situation in the Holy Land (and in the Dakotan Holy Lands) has taught us, it is that we must begin to truly see each other before we can learn to love. 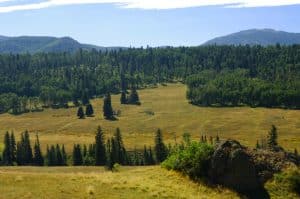 Where are your Holy Lands? This is one of mine, in the mountains of northern New Mexico. I have encountered God there, but I admit I still need to learn to look for the others who dwell here.

Do you truly see all your neighbors? How might you learn to better see and love them?

It will break your heart and inspire you, all at the same time.

Thank you. I am wondering what God has in store….