Night on the Roof of a Cathedral

Henry recently found an article online about a tourist who was accidentally locked in Milan’s cathedral, called the Duomo, overnight. The American tourist chose to take advantage of his unexpected lock-in and spent the night “among the cathedral’s rooftop spires.” 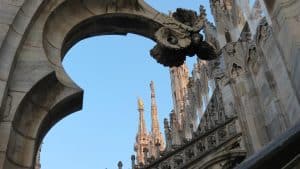 Henry shared the article with my sister and brother-in-law, who lived in Milan for two years. It was interesting to see what each of them noticed. My sister commented on the fact that the same firm has handled the Duomo’s security for the entire six hundred years of its existence. My brother-in-law commented that he would have contacted police to say that he was locked in, despite the ruckus that would have caused.

And I? I found myself thinking of books I have read over the years that discussed the medieval passion for building cathedrals. One of the goals for cathedral builders was to get closer to God—for they believed that God’s home in Heaven existed just above the sky. In those days, cathedrals were the tallest buildings ever constructed, and those fortunate roofers who set the final spires in place could indeed say that they had climbed closer to Heaven than anyone around them.

It’s kind of hard for us to imagine having that kind of passion—and risking that level of danger—just to get closer to the heavens. We fly much higher than those cathedral builders ever dreamed possible each time we get on an airplane. Others amongst us have not found a literal Heaven on their way to the moon—although for many it was nonetheless a profoundly spiritual experience.

I have walked among the Duomo’s spires; it was one of the many places we toured with my sister and brother-in-law when we visited Milan almost twenty years ago. I can certainly see myself taking advantage of a spontaneous “retreat night” among the spires, staring at the heavens. I also find myself imagining those medieval masons and roofers, pausing toward the end of a busy workday to glance upward. What went through their heads when they looked up? Did they tremble in fear of the God who would judge their every thought and action, or did they stand in awe and wonder at their fortune in finding themselves so much closer to the God who created them?

Today many of us believe that God is not “out there,” far away, but “closer than our very breath.” Perhaps that is because we have explored the heavens and not discovered a literal Heaven, comprised of streets paved with gold. Nonetheless, our desire to draw closer to God remains unchanged. Whether we look up, within, or around us, we still seek God.

Where and in what ways do you seek God? What might cathedrals have to teach you about your own spiritual journey?