Recently in prayer, I found myself reflecting on my paternal grandfather. When I think about familial role models for my spiritual life, he is always the one who first springs to mind. Many of my formative memories of him took place in Tucson, so perhaps it is not unusual that he should be coming to mind now that I have moved here to live. 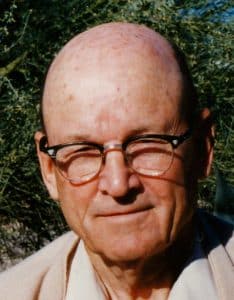 Granddaddy was a staunch Presbyterian who served as an Elder and did his best to make sure that he and his family lived faithful lives. For example, I grew up hearing stories about how strictly he observed the Sunday Sabbath, insisting that no work could be done—but also taking the family on long drives up into the Catalina Mountains for Sabbath rest and recreation. There was never any alcohol in Granddaddy’s house, and I learned to play Rook instead of Bridge at Granddaddy’s because they did not own any of the “devil’s paste cards.”

When I was a child, Granddaddy owned a construction company that mostly built residential buildings, but he also built the sanctuary at Northminster Presbyterian Church. In fact, giving back to the church through the use of his gifts was a passionate commitment for him. The first thing he did after retiring and selling his construction company was to return to Mississippi and construct a new campus building for Reformed Theological Seminary.

Granddaddy felt passionately about everything he did. I still remember a time when my family was visiting and we had spent the day “out and about” doing something together. On the drive home, Granddaddy suddenly realized (perhaps he saw a campaign sign) that he had forgotten it was a local election day. We immediately headed for the polling location—with no stop at home to drop off the rest of us—but still arrived too late. Granddaddy commented that this was the first time in his life that he had missed the opportunity to vote.

Granddaddy was also the first male adult that I remember crying. He was not afraid to show his emotions—something that was pretty unusual in men of his generation. He was also very much connected with creation. I fondly remember a number of early morning walks, where I first encountered quail and learned about a variety of other desert creatures.

At this point in my life, I have a more balanced view of Granddaddy than I did as a child, when he was a psychologically towering figure in my life. I’ve learned about his clay feet—and recognize that we’ve all got them. I also remember disagreeing with him on a number of theological issues, but he was always loving with me in our discussions. Perhaps most of all, I’m grateful for the role model of someone who clearly lived his spiritual life—as he understood it—to the best of his ability.

Who in your family—if anyone—was a spiritual role model for you? In what ways were you influenced by your family of origin about your spiritual life? What still lingers with you from that time?

Here’s a poem that I wrote recently, connecting with those early morning walks.

Focused on pace and place,