There’s no question; it’s hot here in southern Arizona. The temperature hits the century mark on a daily basis, and has even topped 115 degrees (Fahrenheit) a few days in the past couple of weeks. Even the early morning temperatures are already over 80, which makes morning walks quite warm, even at 5 am! 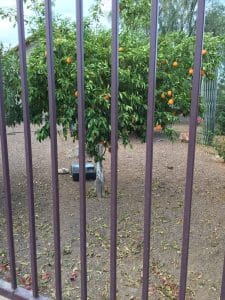 Some days I’m still walking—the desire to be outdoors trumps the discomfort. Depending on the route I take, I pass this little orange tree in the neighborhood. It’s still laden with oranges, months after they should have been harvested. I posted a picture of it on Instagram a few days ago and someone actually thought it was a peach tree, which makes sense from the colors, and a seasonal perspective, as peach trees are fruiting, at least in (relatively!) cooler climates.

But this tree remains unharvested. I have a hard time imagining what would keep its owners from picking the fruit. The oranges are perfectly reachable—unlike some grapefruit we saw in Puerto Rico in March, where the tree was probably over a hundred feet tall and perched on the side of a densely thicketed hillside. The house here appears to be occupied, as there are yard furniture and toys and such keeping the tree company. I do not know these folks, so I’m not about to walk up, ring the doorbell, and ask why they’ve let the fruit go to waste.

But I wonder. We can become oblivious to the growth around us. I can imagine—though I cannot understand—that the little orange tree could become strictly “ornamental” in the minds of the homeowners as they juggle two jobs, three kids, two dogs, and some crisis or another which consumes their energy and attention.

So I can only guess why this fruit was not harvested “in due season,” as scripture says. But I can also ponder the puzzle…and then make connections with seasons in my own life where, for one reason or another, I have left fruit unharvested. Literally, this occurred when I’ve had to move to another city in the midst of a growing season. Figuratively, spiritually, it happened when those moves caused me to leave a ministry behind in the midst of its fruiting season. When we left Massachusetts to move west, for example, I had to leave behind a number of people who had been seeing me for spiritual direction.

But there have also been times when, due to exhaustion or overwork, I have left fruit unharvested in various areas of my life. Sometimes I’ve recognized that I’m at a crossroads, where I must choose this fruit or that, because there simply is only one of me, and not enough time or energy to harvest every opportunity or experience I might wish to grasp. Of course, then, the question becomes whether the “low-hanging fruit” is the best choice, or whether stretching myself to harvest fruit that’s a bit harder to reach is of greater benefit.

And so…this week, I invite you to consider the fruit—literal and spiritual—that you’ve grown in your own life. When have you harvested, and when have you left fruit on the tree? When has there been too much to choose from, or the fruit is unreachable, or you’ve had to leave town in the midst of the growing season? Have there been times when you just haven’t noticed the fruit—where it just became ornamental, a backdrop on your unfolding life?