This past week has been a red-letter week for me. I have taken some big steps on a couple of important roads in my life, and one of them has already proven fruitful!

The first thing I did is to finally(!) submit my manuscript for Dying With Ada to a publisher. This is the book I excerpted here a while ago, about the year that Henry’s aunt Ada lived and died with us. I’ve put it off for a pile of reasons, most of which were really procrastination, fear of failure, and being overwhelmed with the variety of publishing paths available these days.

The second thing I did was to complete and submit to my SCORE mentor three SMART goals for my professional spiritual work over the next 6-9 months. These goals (and stating them publicly here is part of making them real, and being accountable for their fulfillment!) are launching my shirinmcarthur.com website, leading an online spiritual retreat over Advent/Christmas, and publishing my first ebook.

The third thing was actually “forced” upon me, and involved taking a more direct role (and bigger risk) in one of my editing jobs. This is the one for which I’ve already received positive feedback—and it feels great!

But none of this was easy. Dying With Ada was written in 2011–2012, which means I’ve been avoiding “putting it out into the world” for four long years! I’ve owned the shirinmcarthur.com domain for more than a year now, and have done very little further with it. My fears about taking on this additional risk with this client literally had me on my back (not just my knees!) in prayer last week, struggling through it all with God….

So…how did this happen? What has enabled me to take these important steps? Part of it was the workshop at Ghost Ranch. I have walked out of so many workshops over the years, determined to follow through—and haven’t. And so I prayed that I would follow through this time. I made a commitment (again!) to putting my own writing life first each weekday—rather than diving into freelance work right away—and I clearly stated that commitment to a couple of my fellow workshop participants. I wrote out my morning routine, step by step, and kept it up on my computer each day so I could check my progress, celebrate my successes, have self-compassion for where I didn’t follow through, and commit “one day at a time” to try again. I’ve written poetry, and sent a couple of them to those workshop participants. I will share more, here and elsewhere. I’m pondering starting a second, poetry blog…but I might choose instead to keep the focus on those SMART goals, and maybe the ebook will be a poetry book!

The other thing that happened last week was that, in my editing work and elsewhere, I was confronted (again!) with the lesson that we learn much more from our failures than our successes. In prayer and reflection, 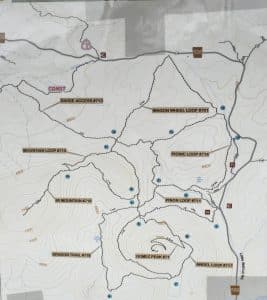 I realized that there is no ideal path, no 100% success rate. I cannot choose the “perfect” path to publishing because there are so many…and in fact, I ended up writing a poem about that! Instead, I need to choose a road, walk a ways, learn its lessons, then decide if another road might be better for next time.

And so I chose some roads, took some steps, and am—at last!—moving forward. Thanks be to God!

Where in your own life are you stuck—for whatever reasons? It might be that, if you take those things to prayer, you will find that the reasons don’t matter. There is no perfect path; what would happen if you chose one and took a few steps, just to see what you could learn?