Another famous musician died this past week. As I dipped into the news feed following Prince’s death, I found myself feeling something similar to what I felt following the death of David Bowie. There’s so much talk about what makes these musicians unique and memorable. I’ve enjoyed their music over the years. I’m also not a musical expert; I found myself contemplating Prince and Bowie as cultural phenomena—and pondering what their stardom might have to say about our cultural priorities and spiritual lives.

David Bowie was lauded as both a chameleon and the truest rock star—in the same sentence, mind you! To me, that seems oxymoronic—or is it paradoxical? How can he be constantly changing and, at the same time, true to himself and his musical gifts? Perhaps he had a genius for chameleon-hood, but what does that say about what we Americans want in our music, our entertainment, our artistic icons?

Then there’s Prince, who “defied genre” and also changed his name—that handle by which he was most-widely known—because of a fight with a record company. Perhaps it’s emblematic of the state of our society, that big business has such a hold over us that we might actually have to change our names to get out from under its thumb. 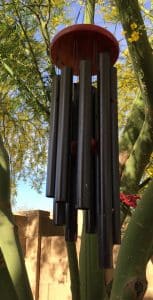 As I pondered musical identities, I found myself out in our back yard, listening to the wind chimes in our trees. Those chimes present a very different image of musicality. Each individual chime is of a different length, yet they appear the same when grouped together. They work together, in unity, to create a harmonious sound. They are not driven by ego, business, or cultural priorities. They are moved by the wind—by the Spirit. As John 3:8 says, “The wind blows where it chooses, and you hear the sound of it, but you do not know where it comes from or where it goes. So it is with everyone who is born of the Spirit.”

Contrary to modern Western culture, we are not created to be “unique and memorable”; we are, in fact, created to be different strands in one interlocking web of creation on planet Earth. Instead of working so hard to stand out, we really need to learn how to stand alongside each other and work together.

And so I ask you: What should truly matter about our cultural icons? Is it their genius for entertainment, or for connection? Is it their success in creatively fighting big business, or their ability to transform our society so that big business might not have such a stranglehold on creativity?

What would happen if we were to laud those who seek to work together, creating harmonious music that includes everyone? Is it even possible—or is it paradoxical?!—to single out those who show us our common humanity?