Grace in Time of Need

On Monday of this week, I received two gifts of grace before 10 am.

The first was from my hiking buddy. I was gung-ho when we started out on the trail, so happy to be out in the woods, away from the boxes and moving details, striding along the carpet of pine needles under my feet. I felt I could walk for hours—and really wanted to. So, at the first intersection, and the second, I opted for the longer route. 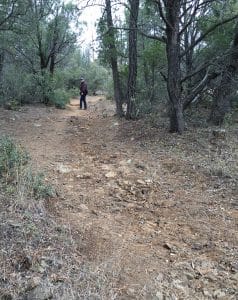 However, the longer route was also more difficult, and by the time we ascended a fairly large hill to the third intersection, I knew that I would have to back off on my idea of a grand tour of Little Walnut. I have been over-extending myself in a handful of ways, and I could feel myself tiring, and even a bit of lightheadedness setting in.

Fortunately, my hiking buddy was very understanding. After a break, some water, and a bit of fruit-leather snack, we chose to return the way that we had come. It was still a beautiful day, out amongst the trees, and we actually ended up hiking about the same distance as we have been the past few weeks. But I had to recognize that I was acting like the hare instead of the tortoise and, especially in this season of moving, I have to think in terms of the long haul.

That thinking in terms of the long haul had been the reason for requesting the other grace: a week’s extension on the book I’m currently editing. Balancing work, move, and the holidays was proving more than I could reasonably handle and keep myself whole and healthy. Yes, I could have pushed myself and done it all, but I realized that perhaps I didn’t need to. The “old me,” the perfectionist, would have pushed through and “made it all happen,” and probably ended up sick as a result.

But I am learning. I’ve already gotten sick once during this move season, and I really would rather not do it again. I was able to honestly say to my client that I would likely be better able to focus if I could have another week, and my client was happy to oblige. In fact, my client mentioned a concern about when there would be time to review my work during the busy holiday season anyway, so it appears that my worries were ungrounded: this grace will benefit both of us.

Today begins the season of Advent, and the Christian calendar’s new church year. Today we enter a season of waiting, for the grace that is God’s love incarnate, coming into the world. But we must wait for it; we cannot make it happen. We cannot schedule Jesus’ appearance among us—despite the evidence of Christmas decorations all around us. This is a season of waiting for something that we cannot control. God’s gifts to us are all grace.

When is the last time that you recognized the need for grace in your own life? Were you able to ask for it? What happened as a result of your asking—or not asking?

When have you been able to extend grace—about something large or small—to another? I invite you to keep an eye out for opportunities to give and receive grace in this hectic holiday season.