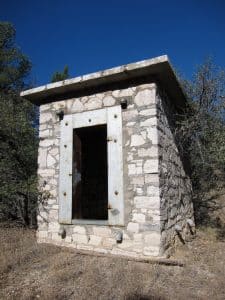 One of the wonderful things about our hikes is the mysteries that we encounter. This past week we were hiking on national forest land and encountered these two small stone buildings. They were clearly well-made and had stood the test of time, but it wasn’t at all clear why they had been constructed in this out-of-the-way location. Here they were, in the middle of the forest, with their open doorways revealing nothing inside except debris and, in one case, evidence of fire. 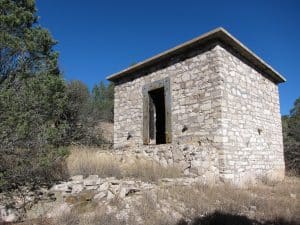 A closer look revealed even more mysteries. Both buildings had large, curved metal pipes built into the walls, most likely for drainage. This would have made more sense if the top had been open, but both roofs were well-constructed from rebar-reinforced concrete. The doorways were sheathed in metal, but the doors themselves were nowhere to be found. Perhaps they have been scavenged or stolen once the buildings were no longer in use.

Initially I thought they might be hiking waystations of some sort, but they were too close together, and had no windows. My hiking buddy suggested that they might be ice houses, and that would certainly explain the drain pipes—although where people would have found enough ice in the desert to store here remains a mystery. 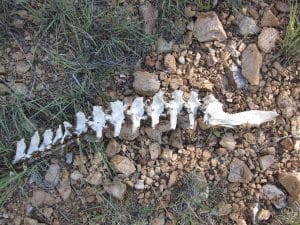 Here is another mystery that we discovered a few months ago on another hike. It is clearly some animal’s backbone, but for us amateurs, there’s no way to know what type of animal it comes from. We have no idea when this animal lived and for how long, whether it survived to a ripe old age or was cut down in its prime, what it ate, and loved, and feared, and dreamed.

Every act of ours can be a mystery to others. I’m sure that those who built these buildings in the forest had very good reasons for doing so, but I will likely never know what they are. Every choice that I make could be a mystery to someone else, whose life experience and current needs could be very different from my own.

Every one of us is a mystery to others. Since we are all mysteries to each other, would it not be wise to treat each other as gifts? What if we viewed every mysterious act taken by another as a curiosity rather than a threat, a reason for compassion rather than ridicule? In this season of Thanksgiving, when the world is also focused on fear and violence, I think that we could all benefit from reflecting on the ultimate mystery that each of us is to everyone else.

We are all God’s children. We are all made for love. We can take steps to protect ourselves, but we also need to love one another, and honor the mystery. How might you do that today?