This past week my work days have frequently been accompanied by the periodic sound of a hard tapping on our kitchen window. The first time I heard it, I thought someone was knocking at the front door, but nobody was there. 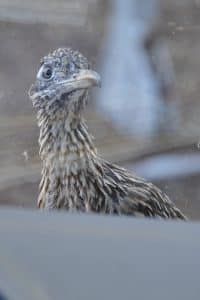 It turns out that we’ve got an adolescent roadrunner who thinks that its reflection in our kitchen window is a competitor of some sort. This bird repeatedly attacks his or her reflection, and keeps doing so, regardless of what I think would be some pretty obvious clues that there’s no other bird there: no sounds from the other bird, a perfect symmetry of beak hitting beak every single time, and the fact that the window doesn’t feel soft like feathers. It would seem that this roadrunner’s bird brain is not either sufficiently mature enough or capable of making these types of distinctions, and so it keeps attacking the window, day after day.

Upon reflection, I found myself thinking about how we, as humans, can end up doing something similar, especially when our more primitive animal brain kicks in. Whether it’s fight or flight, something disengages our more mature cerebral capacities and we will keep on doing things that don’t seem wise from others’ perspectives. Regardless of the evidence, sometimes right in front of our eyes, we can keep on attacking, or running, or hiding. 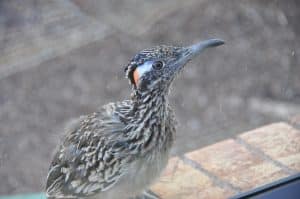 The only way I’ve found to stop the roadrunner is to walk up to the window, close enough that it sees me through the glass and runs away. It’s the same with us: we tend to need large, dramatic, outside intervention to knock us out of that fight-or-flight syndrome. It’s another good reason to live in community: we can gently nudge each other out of our bird-brain reactions to things that aren’t what they seem.

When have you responded to something with a fight-or-flight reaction? What did it take to get you out of that bird brain? When have you been able to help others escape their own limited perspectives and responses?