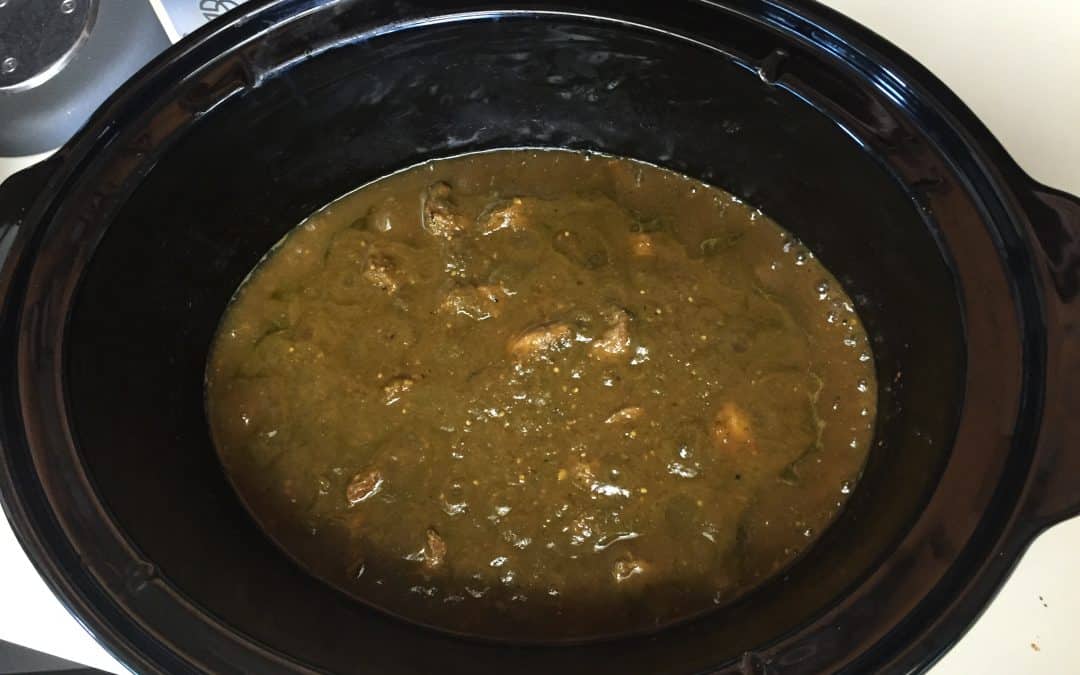 Friday was “try out the new slow cooker” day at our house. I had ruined our prior slow cooker by over-filling it last spring; when the stew overflowed, it seeped into the space between the heating element and the base of the cooker, causing smoke and the danger of fire. I purchased a new slow cooker, but hadn’t yet used it, and since the weather is beginning to cool down a bit, I thought it was time.

The recipe I chose for this inaugural meal was pork chile verde. I love it, but had not tried to make it from scratch in years. Now I remember why; between all the necessary preparatory steps, it took me over two hours to get everything into the “time saving” slow cooker. Tomatillos had to be cleaned, sliced, and roasted. Green chiles had to be roasted, skinned, seeded, and chopped. Other vegetables had to be cleaned and chopped, and everything pureed. The pork had to be chopped, seared in small batches, and the pan deglazed afterwards. Once everything was finally in the cooker and the kitchen cleaned, it was past time for lunch! It’s a good thing this cooker has a high setting; otherwise we would have eaten dinner at 8 pm!

As I was cleaning up afterward and marveling at the time this process had taken, I found my mind wandering back to the first time I consciously remember learning about food that could take an entire day to prepare. I was teaching English in Seoul, South Korea at the time, and I remember being told by one of my students that a certain dish—I honestly don’t remember what it was at this point—would take her mother an entire day to prepare. I also remember watching Korean women make kimchi outside the apartment building where I lived. It was a full-day process, between cleaning the cabbages and pre-salting them, mixing up the multi-ingredient chile paste, smearing that paste between each and every leaf of each and every cabbage, then piling them into large earthenware jars that had been dug deep into the earth of the back yard.

I don’t remember my mother spending an entire day in the kitchen—but I usually was away at school and didn’t really notice. Mom did regularly make homemade bread that, with rising time, took most of the day to complete. I do remember coming home from school and being greeted with hot-from-the-oven whole-wheat bread, spread with melted butter. Ahhh, precious memories!

I find myself contrasting these time-consuming cooking memories with the standard in my household—and many others, I suspect—these days. I rely on help from packaged foods, whether it be frozen salmon burgers from Costco or chicken breasts that I buy already boned and skinned. I also tend toward vegetables that can be chopped and cooked quickly, or a salad with components that are relatively easy to put together. Because I work during the day, I tend to allocate between 30-60 minutes for dinner preparation; taking more time feels impractical with my other responsibilities.

I’m also aware today that I take those packaged foods for granted. I do not usually think about the person who formed the burger or skinned the chicken—or the possibility that machines are now involved in both of those processes. My relationship with food takes a lot for granted—at least until a day like last Friday, when I take the time to roast tomatillos, remove skin and seeds from local chiles (a few of which were from my own garden, along with the onions and garlic), and give thanks to God for the abundance of food in my life.

Do you take food for granted? Do you rely on help from packaged foods? Do you remember to give thanks for those whose work makes your own cooking process easier?

Do you have memories of meals that have taken hours to prepare? Have you done the cooking yourself? Thanksgiving is a possible example; cooking a whole turkey certainly isn’t a 30-60-minute task. Is there value for you in the taking of time to make things from scratch?