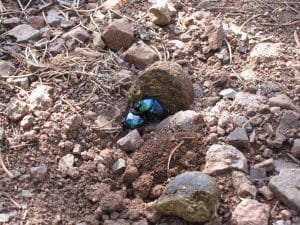 My friend and I have enjoyed seeing some pretty interesting critters on our recent hikes. One day we watched a pair of iridescent dung beetles rolling balls of horse dung along our path. While for us those balls are smelly waste, for the beetles they are both dinner and the perfect baby incubators. What we carefully avoid when we encounter it on our hiking path, these beetles joyously cart away and consume. After all, this dung is even round; they don’t have to reshape it before they can transport it! 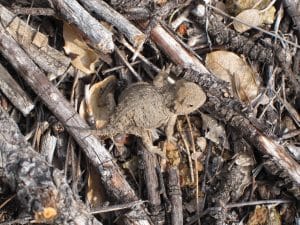 Another week we saw four different diminutive horned toads on a single hike. We decided it must be “coming out” season for these tiny relatives of the lizard, as these definitely seemed smaller than the standard adults we’d seen at other times. With their rounded torsos and spine-studded skin, they don’t look like your average lizard, but they sure do move like one!

Appearances can be deceiving. You would think that something as beautiful as the dung beetle, with its iridescent green and blue coloring, would not spend its time around—and even in—other creatures’ shit. You might also think that a horned toad would hop, not scurry, in part because of the name we have given it, based on our presumptions about its appearance.

Appearances are also deceiving in our own lives. In the first Republican presidential debate a few days ago (I shudder to think what the next fifteen months will bring!), I appreciated Ben Carson’s comment that, as a neurosurgeon, he focuses on those “things that make us who we are”—beneath and beyond the color of our skin. While I agree with him on that, I imagine there are many other things about which we would definitely disagree!

And that’s the thing—about us humans, and all of God’s creatures. We can only imagine, and guess about, each other, unless we take abundant time and pay careful attention to truly watch and listen. It’s a huge part of what I do in the ministry of spiritual guidance: watch and listen. I listen not only to what the other person is saying, but also for the voice of God in the conversation, and in my own heart.

When’s the last time you truly, intentionally, watched and listened to another? How did that stance affect the interaction, and shape your understanding of the relationship?

When’s the last time someone, or some creature, surprised you by acting or speaking in a way that you didn’t expect? What did your expectations have to teach you? Did the interaction change your viewpoint?