The Stuff of the Earth

This past week, Silver City hosted its annual CLAY Festival, which is a weeklong celebration filled with workshops, exhibitions, receptions, youth activities, tours, demonstrations, a mud pie contest, a poker fundraiser (did you know that poker chips were originally made out of clay?), and a street party. It’s much more than any one person can take in, and people flock in from all over the country to participate. 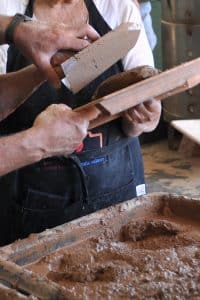 Naturally, it’s also more than one freelance photojournalist can handle, too. While I did take pictures at a number of events, there was no way that we could catch everything. On the other hand, after I’d submitted my photos, I found myself one day paying attention to the hands and the mud in the images I had taken. This particular class was about mixing and applying natural plasters to walls, and during the time I was there taking pictures, participants were learning how to load plaster onto their trowels and apply it to a wall—or, in this case, a piece of fiberboard.

There’s a great amount of fun to be had in playing with the mud. No one was worried about staying neat and clean. Students could scoop up the mud, then splat it back onto the carrying tool, called a hawk, or back into the tubs in which it had been mixed. Yet there were also some precise techniques to be learned in order to keep that plaster on the trowel, apply it evenly and efficiently—and have it stick!

A lot of these classes are about having fun with this element of earth. While I might become frustrated with the layer of clay I have to dig through in my garden beds, when extracted, ground, and mixed with water, that same clay—or its relatives—can become the foundation for some incredible works of art, as well as the stucco that covers so many houses in this area.

Plus, as scripture reminds us, we are also created—crafted—from elements of earth. While the specific mix of molecules in our bodies is different from the mix of molecules in the plaster, we are akin to that plaster, and children of the same earth. Genesis 2:7 says that we were formed from the dust of the earth; when we are playing with clay, we are touching a common history, and recognizing a bond we share.

Perhaps, then, it’s not surprising that this festival is so popular. We are stuff of the earth, just like the ceramic artworks I’ve admired this week. Just like the coyotes and jackrabbits running through our yard. Just like the birds who squabble over the sunflower seeds—which are also stuff of the same earth.