This past week’s hike turned into a rather more circuitous route than we had expected. The trail map indicated a fairly straight line between two points, but the older trail had been closed, due to erosion, and the new trail had a number of curves and switchbacks that eventually led to the same destination, but by a very different route. 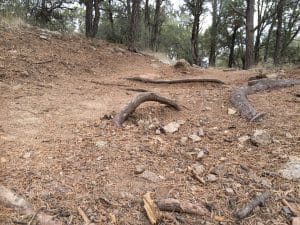 The number of boot and bicycle-tire prints on the trail were indicative of the fact that this newer trail is also well-established. Roots which once ran underground are now exposed, due to the slow and steady erosion caused by feet, tires, wind, and—occasionally—water.

I found myself thinking about how we tend to follow the same, established, pathways in our lives. We commute to work along the same roadways, take the same turns to get to the grocery store, and follow the same route to our favorite hangouts, be they our local church or the best hamburger joint in town.

Scientists say that we do the same thing with the pathways in our brains. Over time, the lines of thought that we frequently think become more established, and stronger, than those we do not visit. This is why the practice of prayer makes it easier to practice prayer the next time, and why we can, with enough persistence and practice, let go of negative or painful thoughts, establishing and maintaining newer—and hopefully healthier—mental pathways in our lives.

I wonder if we also create problems when we always use the same pathways, over and over again. Certainly we tend to pay less attention to our surroundings, taking them for granted. We come to believe, if only subconsciously, that this is “the way” and therefore, by extension, “the only way.”

I’ve been working as a freelancer for three years now. Four years ago, if you’d told me that I would make such a radical shift—leaving employment in a well-established organization in order to work for myself—I would never have believed you. I was not very happy working for others, but I was much more afraid of walking away from the security of being a cog in the wheel of an organization that provided me with steady income and benefits.

Now, I can’t imagine being someone else’s employee. Contract work is a different life, and in some ways more difficult. But over the past three years, I’ve established this new way of working, integrating it into my life, and the benefits (such as taking a weekly hike with a friend during “working hours”!) have come to outweigh the risks. This has become my new “way,” and I really like it.

However, on my hike last week, I began to ponder whether we create something similar to erosion when we tread those familiar pathways, mental and physical, over and over again. For example, I’ve become complacent with my life as a freelancer. Is erosion wearing away this no-longer-new pathway and exposing roots, ready to trip me up if I’m not paying attention?

What are those roots? I think fear of change is one that lies buried beneath the surface until our repeated treading of a pathway exposes it. Then it will trip us up if we’re not open to change. As I am preparing to create my own spiritual website in order to offer online retreats by the end of the year, I’m well aware that I’m once again leaving another well-worn, established pathway, and charting what is, for me, a new course.

I also believe—trust—that this pattern is a good one. We need to branch off onto new paths and explore different ways to approach the journeys in our lives. A couple of weeks ago a reporter reached out to me, and this past week, an article on my Embodied Prayer ministry appeared in the local paper. It’s another level of publicity—another broadening of the circle that is hearing my message. It’s also another level of commitment that I’m making to this ministry I’ve created. There’s a paradox involved here, between establishing pathways well enough that others can follow, while not allowing erosion to destroy them.

What pathways are well-worn in your own life? What roots are now exposed by erosion? What new pathways are you being invited to explore?