The Attainability of Ideals

As I shared a year ago, I’m a member of Spiritual Directors International, and attended their annual conference in person last year. This year it was a bit further away, in Louisville, Kentucky, so I chose to register for their webcast instead, and listen to the talks on my computer. I knew that I would miss out on those wonderful in-person connections, and that most of the workshops would not be broadcast, but I decided to see if the webcast experience was worth it.

I also had family visiting during that time, so it’s only been this past week that I’ve finally watched the videos. There are some advantages to recorded webcasts, like being able to hit pause and take notes without missing what comes next. I’ve definitely gleaned some wisdom from the talks I’ve heard, and some of that sparked connections that I’m going to share here today.

SDI chose to hold its conference in Louisville because this year is the 100th anniversary of Thomas Merton’s birth. A wise monk, prolific writer, and spiritual guide, Merton has influenced millions of people through his books and example during the past century, and many of the talks at SDI’s conference focused on his life and work.

One talk, given by Sr. Susan Rakoczy, centered on the theme of discernment in Merton’s life, and his struggle to find solitude in a life that, for a monk, felt increasingly full, busy, and noisy. Some of this was actually the result of Merton’s own actions. For example, the publication of his enormously successful autobiography, The Seven Storey Mountain, brought dozens of young men to try their vocations at the Trappist Abbey of Gethsemani, overcrowding the monastic community where Merton lived. Even when he was finally given permission to live in a secluded hermitage on the Abbey grounds, he found his days filled with visitors who came to meet with him for spiritual guidance and conversation.

At one point, Merton actually tried to transfer to a quieter, more contemplative monastic order, but the church hierarchy decreed that he had to stay at Gethsemani. It was at this point in the lecture that I found myself thinking of the medieval French abbess whose biography I edited earlier this year. She always sought to be “a simple nun” and that calling was, for many years, denied her. Even when she finally succeeded in resigning as abbess, the experience was in many ways not what she had expected, or desired. Merton always sought to be in “solitude,” and that was, for most of his life, denied him, nor was he able to “keep the world at bay.” 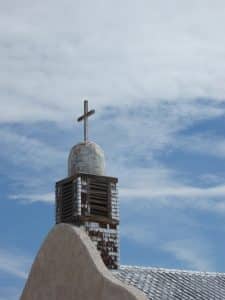 I wonder if “unattainable ideals” is a theme in the monastic life. Richard Rohr likes to tell the story of a Trappist monk who admitted that most of Merton’s fellow monks didn’t care for him because he told them they were not true contemplatives, just introverts. I imagine that it’s quite possible that monks and nuns seek a monastic life because they’ve got a certain idealized view of that world—and often the reality doesn’t match, to a greater or lesser degree. An SSJE monk once told me that only one in ten men who arrive to test their vocation actually takes final vows; the rest learn and grow from the experience, but also learn that monastic life is not what they are truly seeking.

I believe that the same is true for those who live outside the monastic walls. Whether it’s the “perfect” marriage, an “ideal” job, or “just the right” career, we usually find that the reality doesn’t live up to our internal expectations.

Another task I completed this week was a first draft of a talk I will give at a Cursillo in June. I was asked to give the talk on Ideals—and here’s where it gets interesting. For the creators of this three-day renewal retreat, “ideals” are not unattainable. Instead, they believe that each of us has a single ideal that drives what we do in life. Instead of being “pie in the sky,” I found myself thinking of it more like the cantus firmus of our lives—the underlying musical theme that persists through all the variations in how we live out our days.

So perhaps the key is to understand that living a life of solitude was, for Merton, the underlying theme. In her talk, Sr. Rakoczy read from some of Merton’s descriptions of the moments of solitude that he did experience in his life. Clearly these were powerful and transformative for him, and they often evoked some of his most effective writing. But most of his time was not spent there. It was spent in the daily busyness of prayer in chapel, work in the garden, meeting with other monks and with visitors, writing, studying, answering letters, washing dishes, and all the other details that monastic life can entail.

We also don’t always dwell in our ideal worlds. Our marriages have their perfect moments, but also their disagreements, and the days we’re just too plain tired to do more than coexist. Our jobs can be a great match for our gifts and skills, but that doesn’t mean we don’t sometimes have to deal with poorly trained colleagues and impossible-to-please customers.

I invite you to reflect on what I’ve shared here and pray about what resonates in your life. What have you idealized? Can you learn to be content with the attainability of ideal moments in your life?