Following Nature around the House

There was a day last week when I “should” have been working and just couldn’t bring myself to do so. It was a beautiful spring day, and finally warm enough after a few cloudy days—along with some rain and snow last Sunday!

But last Wednesday was beautiful, so I took the opportunity to get out in the garden. I watered, trimmed, pulled weeds…and then went to feed the birds. As I walked toward the bin where we store the bird seed, I startled a snake, which moved quickly behind the bin. Fortunately for my peace of mind, its tail slithered into view as it swung about and I could see that it wasn’t a rattlesnake. It was, however, a good-sized snake, and exactly the color of the bricks on the side of our house. I decided to wait on filling the bird feeders and went inside the house to see if I could capture it with my phone camera through the window. I could, and I sent a couple images to Henry…but I wanted more. 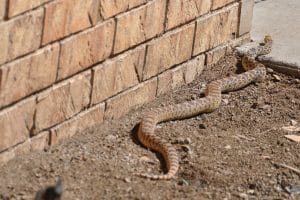 Grabbing my camera, I went outside and followed it around the outside of our house. Sometimes it blended in perfectly with the wall and soil; other times it was clearly visible against our concrete back porch, or when it slithered over a hose. 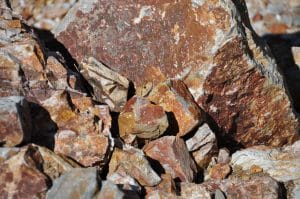 Can you find its head amongst the rocks here?

I startled some other wildlife on my walk, and snapped a few pictures of a lizard sunning itself on our back wall. I also noticed that some of the rocks are falling out of the back side of our wall…a major project for a future date! I also took a few photos of our irises, which have survived the depredations of the deer this year due to an effective deer repellent spray.

Eventually the snake made its way outside our back yard and disappeared into the grasses in the meadow to the east of our house. I let it go and walked back indoors with my pictures, content with my day and ready to sit at the computer for a while.

Perhaps the reason I wanted so much to be outdoors was because this snake encounter was awaiting me, and somehow I knew I would miss out on something if I stayed inside. Unlike a friend who recently had a rattlesnake slither across his back porch, I don’t have dogs to alert me to its presence. I have to follow my instinct, pay attention, and perhaps even play “hooky” from work for a little while.

Have you ever followed your instinct and spent time doing something when you “should” have been doing something else? Were you rewarded with the gift of an encounter, or realization, or connection?

I invite you to follow that nudge next time, and see where it leads….