I spent much of yesterday in tears. I attended the memorial service of Harold M. Daniels, who was pastor of the Presbyterian church in which I was raised, and instrumental in spoiling me for any other Presbyterian church by introducing the Great Vigil of Easter and other liturgical “reforms and renewals” during my youth. A major part of the reason that I became an Episcopalian 20+ years ago was that the Episcopal Church puts more emphasis on liturgy and sacraments—which became very important to me in large part because of the influence of Harold Daniels. 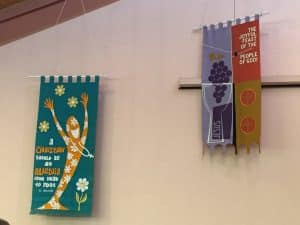 What first brought me to tears yesterday was walking into the sanctuary at St. Andrew Presbyterian Church and seeing that they had hung four of the banners in the front of the church that used to hang in the smaller sanctuary when I was young. Created in the height of the 1970s, they have a certain look to them that is probably anachronistic to most people today. For me, however, they immediately evoked memories of a passionately engaged, growing congregation of young families that instilled that vibrant, relevant faith in their children. 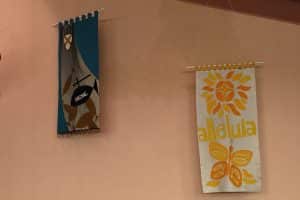 During the service, which was (naturally!) planned by Harold and called “A Service of Witness to the Resurrection,” I enjoyed watching many of those no-longer-young parents of my church friends participate in the liturgy with similar passion. I also sat there thinking about the fact that I was one of the youngest people in the room—with the exception of Harold’s grandchildren. What was relevant and “cutting edge” in the 1970s is not so today—and yet so much of the liturgy that Harold brought into the life of St. Andrew Presbyterian Church was deeply rooted in the early history of the church. It was not just reform; it was rediscovery.

At the service, I also sat two rows behind a woman who was very influential for me—although I don’t believe I have ever told her this (and therefore I shall do so now…!). She led a liturgical dance group at St. Andrew when I was young. For some complicated reasons I did not participate, except occasionally as part of the youth group, but I longed to do so. Many years later, when re-introduced to the concept of movement prayer during my formation as a spiritual director, I wholeheartedly embraced it, then found and joined a liturgical dance group in the Boston area. The monthly Embodied Prayer sessions which I now lead (ironically, at the local Presbyterian church!) are rooted in my belief that all of us are invited to pray with our bodies—something I first learned so many years ago at St. Andrew.

In such ways is the church continually renewed and reformed, remaining relevant in the face of changing times. I imagine that, when I was a child, the older generations at St. Andrew were appalled at those bright and flowery banners, just as many of those celebrating Harold Daniels’ life are likely uncomfortable with the use of slide shows and praise bands in liturgy today.

And yet…we must remain relevant if the church is to have any hope of flourishing in the future. Harold Daniels knew this, and I imagine that it’s part of what drove him to return to the “original sources” of his Reformed tradition (note that the quote on the “flower power” type banner is from St. Augustine!), seeking liturgical elements that would engage the members of his youthful congregation. And the liturgical dancer at St. Andrew created indelible memories in my young mind of how worship could include the body, as well as mind and voice. Over the years, my prayer has taken bodily form in many ways, and that passion has driven me to share it with others.

With all these memories and realizations flowing through me, it was a lovely irony that yesterday ended with a “Skype date” with one of my spiritual director colleagues, who is a bit older than me and has been asked if she would be willing to do spiritual guidance via Skype, as I do. She’s been a bit nervous about how this new technology works, and so we agreed to have a session together, so she could experience the process, and I could share some of the wisdom I’ve gleaned from doing this for the past year. Here we are, both firmly entrenched in a ministry that some people say “has to” be done in person, recognizing that we can only remain relevant if we are open to the Spirit’s guidance in embracing new possibilities—and, as we discussed, much spiritual guidance 1000 years ago took place via letter! By seeking renewal in a blend of deeply rooted tradition and the embrace of new technology, I believe we are honoring the Holy Spirit’s call to remain relevant in our ministry today.

Where do you see your faith community being relevant and engaging today? In what ways is it anachronistic? What does this awareness invoke, or invite, in you, in terms of a response?

Is there someone who has deeply impacted your life, who might appreciate some form of recognition and appreciation of that influence on your life or ministry?

This is beautiful, Shirin! May I pass it along to Sharon Yates, whom you may know as the Assistant Stated Clerk of SF Presbytery…or perhaps as the wife of Frank Yates, the pastor who retired last year from St. Andrews? I think she and Sallie Watson (do you know our outrageous and wonderful Missional Presbytery/Stated Clerk?) might like to include it as a link in the next on-line newsletter.

Hope to see you soon! When will you next be in Albq.?

Thank you, Jan! Of course you may share it! Sallie Watson participated in the service yesterday, and I imagine Sharon was there, as I saw Frank Yates, but I don’t recall meeting her.

I’ll email you about my Albuquerque plans; it would be great to get together and catch up!