I have some pretty strong memories of Easter lilies. This vivid white symbol of resurrection was an integral part of Easter in the church where I grew up. When I was a teen, we kids were assigned the task of running into a nearby room during the Easter Vigil, just as the resurrection was being announced, and running back into the sanctuary with pots of lilies in our hands to place around the communion table as the lights came up and the choir sang. All these years later, I’m still getting teary-eyed writing this….

But some of those memories also have to do with lily pollen, which is pretty strong and causes allergic responses in many who sit in church pews—myself included. I don’t remember exactly when, but I do remember being thrilled when someone at that church showed me how you could pull out the pollen pods, just after the lily flower opened and before the pods turned themselves inside out to spread their magical, misery-causing scent.

This past week I’ve been watching the flowers that have appeared in my own yard. I’ve enjoyed the scent of round yellow Mahonia flowers, and celebrated the appearance of peach blossoms on the tree I planted last fall. I’ve also been pleased to see that a few brave tulips have survived to blossom, because the past two years they were eaten by deer long before anything had a chance to flower. 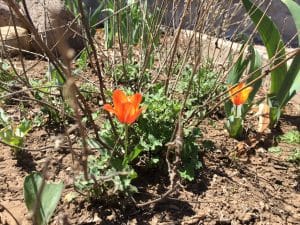 I believe that one reason the tulips have survived this year is that I chose not to cut back the tall, dead stems from last year’s globe mallow wildflowers, which have grown up amidst the bulbs in my flower bed. While many here treat globe mallows as weeds, I allowed them to commingle with my bulbs to give summer-long color to the flower bed. I figured that they had a place, and a role to play. I thought that place and role had to do with summer color—but when the tulips began to appear early this spring, and weren’t immediately eaten, I put two and two together and realized that the deer likely weren’t interested in trying to eat tender bulb shoots that were surrounded by tall, spiky sticks that must smell as unappetizing as the live plants do. In this way, the dead are protecting new life in my garden bed.

To me this is a wonderful symbol of Easter and resurrection. New life would not survive to flower in this corner of my garden without the “assistance” of death in the form of last summer’s flower stems. There cannot be resurrection without death. The two go hand in hand, in our own lives as well as the life of Jesus.

Where in your life has death actually helped to protect or foster new life?