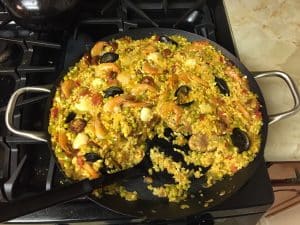 Last night Henry and I tried our hand at making paella for the first time. Paella is a destination dish for Henry; we’ve had it in Spain, Puerto Rico, and San Diego, as well as numerous places in between. But this was our first time to try making it ourselves—out in the middle of the desert.

If I do say so myself, we did a pretty good job for first-timers. We splurged on real Spanish chorizo and found mussels, scallops, and shrimp at our local market. We used the genuine saffron that’s been sitting in our cupboard for a while—and the rice ended up with the rich, yellow color it was supposed to.

I’ve found myself thinking about first-timers because of today’s gospel lesson. In it we hear about the beginning of Jesus’ ministry. The first people he explicitly called into service were fishermen. These were people who spent their days catching seafood at the place where the desert meets the Galilean Sea—although they caught sardines and tilapia (also called St. Peter’s Fish), not scallops, mussels, and shrimp (which were considered unclean).

Out on the water, harvesting fish, these fishermen saw the full spectrum of life, in all its rich beauty. They were secure in their place in the economic food chain—until Jesus called them from the sea and invited them to participate instead in the spiritual food chain that he was putting into place.

That spiritual food chain would be focused on a hunger for God in the people around them, rather than the people’s need for physical nourishment. Fishing for people would require Jesus’ disciples to learn a different set of skills—and a different perspective on “catching” something. When they said “yes” to Jesus’ call to cast their nets elsewhere, they became first-timers, entering new waters, with little idea of what lay ahead.

Fortunately, Jesus provided for his new followers a roadmap, or a recipe of sorts. We call it the Sermon on the Mount, and it includes such classic lines as “Blessed are the poor in spirit” and “You are the light of the world.” Listening to Jesus, those fishermen must have felt like fish out of water—at the same time that their hearts were catching fire.

Have there been times in your life when you’ve felt like a fish out of water, called into new experiences, becoming first-timers…again? How did you cope? What did you learn?

When we follow the recipe of the gospels, we learn how to catch people in the net of God’s love, and share God’s abundant riches of mercy and grace. I invite you to read the Sermon on the Mount this week and ponder Jesus’ recipe for the spiritual life. What elements are new to you? What elements can you live out in your sleep? What is in this sermon that might be missing from your personal recipe?