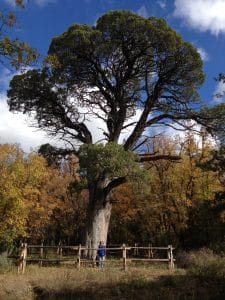 I’ve finally seen it—up close and personal (yes, that’s me standing under the tree!). After two years of hearing about “the big tree,” we finally went to it on one of our recent weekly hikes. As you can see, it certainly is a very tall, very wide, quite grand tree. According to the Forest Service, “The Big Juniper Tree is nationally ranked as the second largest alligator Juniper Tree. Its diameter is 70.2 in, circumference is 18 ft. 4 in, crown spread is 62 ft., and height is 63 ft.” They don’t say how old it is, which I’d like to know—but perhaps they’ve decided not to damage it in order to find out.

I’ve been thinking a lot about trees lately, in part because my blogs during Advent will focus on a tree that Henry and I have purchased…but you’ll have to wait until next week to learn more about that! Today, however, is Christ the King Sunday, the last Sunday of the Christian year, and it seems quite fitting to meditate today on a truly kingly (or perhaps queenly?) tree.

This tree has withstood many things over the years. People have carved their names into its bark. Some limbs have died, while one or two others show signs of what might have been fire, or a lightning strike. But the tree itself appears to be quite healthy, with nary a yellow branch or needle in sight. And as you can see in this photo, the Forest Service has surrounded the tree with a fence—but not to keep people out, as there is a way in on one side. Our guess was to keep elk from rubbing their antlers on the bark…but it still seems like a funny thing to do to a tree that has survived everything that has come its way for hundreds of years before we humans arrived with our fence!

The Christian tradition is not unlike this big tree. It has withstood many things over the centuries. People have attempted to imprint their names upon Christianity—although, for the most part, it is those like St. Francis and Mother Teresa, whose focus has not been upon making a name for themselves, who have succeeded. Some limbs—some versions of the faith—have died out, but others are flourishing, and the center remains strong. Some have tried to fence it about to “protect” the faith, but it is just as ironic to think Christianity needs our protection as it is to fence a tree that is more endangered by our pollution than by the wild animals that have peacefully coexisted with it for hundreds of years.

What traditions have a kingly, or queenly, stature or role in your life? Do you seek to carve your name into them—to make them yours in some way? Do you build fences to keep others out—or in?

What, or who, reigns as king or queen in your life?