Henry and I took some vacation time a week ago to visit family and friends in New England. It was a great trip and the autumn leaves were stunning. But this week you’re not getting stunning fall color photos…maybe next week. This week you’re getting some musings on recycling and Caesar.

You see, the night Henry and I stayed in southern Maine, I was thrilled to find recycling containers in the hotel room. I had been keeping our various drink bottles in the back of the car, hoping that I could pawn them off on family for recycling at the end of our trip. I’d forgotten how progressive Maine is with recycling, and had no idea that hotels might have (perhaps be required to have) recycling options in every room. When I mentioned that to Henry, he suggested that I should write a blog about it—and then joked that we could write off the cost of the hotel room if I wrote that blog. 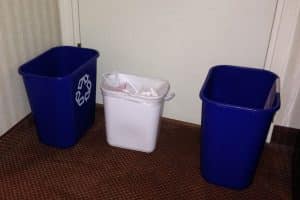 So I took a picture of the recycling bins, and we had an interesting conversation about what he called “an accountant’s nightmare”—which would occur if I were to write off the hotel room as a business expense because I had managed to incorporate it into my ministry. He pointed out that the gospel lesson for last Sunday involved Jesus outfoxing the accountants of his day—Sadducees and Pharisees—by responding to their query about the lawfulness of taxes by stating that we should render unto Caesar that which is Caesar’s, and give to God that which is God’s.

Jesus was those accountants’ nightmare. He turned the established norms and laws on their head, reminding anyone who would listen that God held true primacy in their lives. Sure, the coins were stamped with Caesar’s image, but they were made with metal that, like all of creation, belonged first of all to God. In a sense, if I were to write off that hotel room stay, it would be with dollar bills that were printed with words and images belonging to the US government, but on paper that was once the fruit of thriving cotton plants created by God.

You see, ultimately, everything is God’s, regardless of how we have transformed them through our use. And therefore everything is sacred. And so I ask you: how would it change the way you live your life if you kept in mind that all your money was really God’s? How would it change your life if you were to choose to live in the daily awareness that everything around you—no matter whose image it now bears—belongs to our lavish Creator?