Another Face in the Wood

Another thing that caught my attention during our time in California was the number of blackened and scarred trees. We see on television the powerful pictures of fire tearing through the drought-ridden California hillsides, but once the fires are over, they tend to fade from consciousness—at least for those of us in the rest of the country. 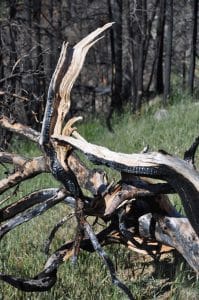 However, every time I drive through the Black Range in southern New Mexico, I am reminded of our own Silver Fire, 15 months ago, which left behind many similarly blackened and scarred trees. I usually don’t stop to take pictures, but last fall I did take a few, including this one at Emory Pass.

What caught my attention in California was a huge skeleton of a tree with a hollow center, big enough for me to stand inside if I had wanted to thoroughly blacken my clothing. Thriving nearby trees show that it’s clearly been a few years since this fire, but the occasional remnant remains, and once again (as during my retreat in April) I saw a face in the wood. 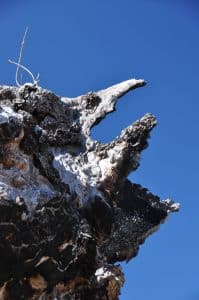 It’s rather animistic, and some would say unchristian, to say that I’ve found myself wondering whether these faces represent some element of the spirit of the tree…but I have thought about it. Is there any reason why God would not give a portion of the divine Spirit to other living beings besides humans? Certainly many Americans are convinced that their pets are possessed of a spirit as well as intelligence. Why would God not bless all creation equally, since Genesis tells us that God saw all creation as equally good?

When I look at the face at the top of this gnarled, scarred trunk, I sense a spirit crying out in anguish at the lick of flames and the heat of fire. It reminds me of the cries that I also imagine are emanating from Mother Earth as we continue to abuse her to feed our insatiable appetite for fossil fuels, dig deep for precious stones and metals, and carelessly discard trash wherever we please. Surely this is not what God meant in Genesis 2:15 by “cultivate and care for it.”

Where in your own life to you see God’s creation crying out? What are you being called to do in response? What is your prayer for “this fragile earth, our island home”?