Pests, Blogs, and the Spiritual Life 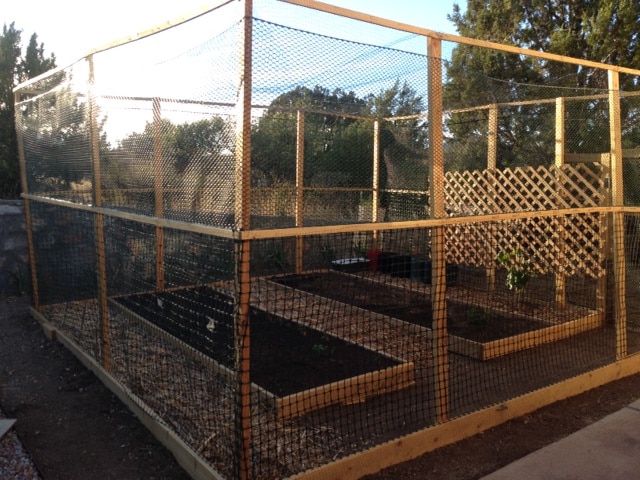 This spring Henry and I spent many hours building a cage to keep various animal pests out of one area of our yard so that I might attempt a vegetable garden. It turned into quite an elaborate enterprise, in part because we kept changing the parameters. Originally we purchased plastic deer fencing, then realized we also needed to keep the birds and bunnies out. We ended up with two different types of bird netting, some of which we stapled on top of the deer fencing because the holes were large enough that birds were getting in. I planted a number of seeds and young transplants, as well as moving my raspberry and blackberry bushes into the cage in the hopes that I might get a few of the berries.

Last month I was away for a few days, and a friend was watering. The very day I came home, something got into the garden, ate the lettuce back to the ground, chomped on a few other seedlings, and “topped” about half of my tomato plants. When I investigated, I discovered that something—presumably a young rabbit, as I later saw one doing exactly that—had literally chewed through the bird netting at ground level and squeezed through the holes in the deer fencing to get at my tasty young plants. So out I went to purchase chicken wire, which I stapled over the lowest layer of the cage. This seems to have solved the rabbit problem.

But I’ve still got pests. I’ve found tiny baby grasshoppers in my garden, and they or some other pests have also nibbled holes in pepper and berry leaves, munched on the spinach, and even munched through the tender young stems of the berry plants. And a couple days ago I saw a tiny bird inside my garden—which slipped out between the bird netting when I walked into the cage—proving that some birds are small enough that netting makes no difference! The next day there was actually an oriole inside the cage! I still have absolutely no idea how it got in, and we spent a bit of time trying to chase it toward the open gate before it finally got so exhausted that I was able to capture it and carry it out.

I’m frustrated, but there are limits to what I am willing to do to stop the invaders. I am determined to have an organic garden, and know that bees are critical as pollinators, so I will not be spraying poisons around my yard or screening in the entire garden. I’m also very aware of the terrible drought that is plaguing our state, and many others, which means there is not much food available for the wild critters around here.

So what does all this have to do with the spiritual life? I’ve been pondering that over the past few days. Part of it, I suppose, is the relentlessness on both sides of the equation. The bugs and beasts keep trying to get food, and the plants keep trying to grow. Munching might delay a plant’s fruiting, but it takes more than most of these predators can manage to actually kill a plant.

I think the distractions, detours, and other struggles in our lives are similar. I delayed starting this blog for many months, but eventually the Spirit, pushing for it, was able to overcome the insect-type depredations that I let nibble away at my time and energy each week, keeping the blog posts from coming into being. Now, with the commitment made, it’s sometimes still a struggle, but there’s always something worth writing about, and some way to connect it with that larger picture of growth in the spiritual life.

What in your own life is struggling to make headway against the depredation of the “pests” in your life? Where do you need to set clearer boundaries, commit to new practices, or make other changes in order to bring about growth, maturity, and fruit in your own life?