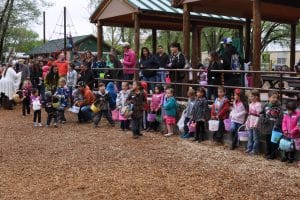 On the eve of Easter, I fulfilled my first assignment as a rookie photojournalist for the Grant County Beat: capturing images of children at an Easter egg hunt in a local playground. There were 4 hunts, arranged by age, and it’s amazing how fast 250 eggs can be snapped up by dozens of eager young children! I saw at least one child who was in tears afterward, I think because she had been bowled over by the competition, and ended up with no eggs in her basket.

That made me long for the days when Easter egg hunts were less of a competition and more of an excited search. I remember hunting for Easter eggs in the living room of my youth, where they were always hidden well enough that it was much more of an exploration than a smash-and-grab. And there was plenty for everyone—just as 250 eggs certainly should have been enough!

Our world is full of abundance. Despite popular perceptions, there really is enough food in the world for everyone—if it were more equitably distributed. That children’s Easter egg hunt became a snapshot of the issues for me: those more fortunately located and greedier gobbled up more than their share of the eggs, while others were left with empty baskets. And there was no malicious intent in those children who ended up with more; their cultural system had taught them that this was the way to behave.

My own fasting from sugar during Lent also showed me that there is an abundance of other types of healthier(!) calories that I can eat to keep my body sustained—without gaining weight. (In fact, I lost 7 pounds during Lent—which was a great side effect, but not the reason for the fast. And the fact that my clothes were tight before, when others do not have enough to eat, is an indictment of my own unwitting participation in this cultural system!)

There are signs of hope in this, God’s world of abundance. I saw young children sharing eggs with those who received less, and celebrated in my heart that innate sense of equality and interconnectedness that we are all born with. Last year there was a major campaign in the UK to fix the broken food chain, and it achieved some major systemic successes along the road to end hunger.

But there’s more that we need to be doing. Here in the US, one in six people face issues of hunger—despite the relative prosperity of this country on the world stage. So we don’t have to look far, both for the need and for the abundance (there are far too many eating competitions in this country, for starters—there’s plenty of food to go around!).

In this Eastertide (and beyond?), I invite you to consider your own food, your own abundance, and how you might be called by God to share with those less fortunate, and/or to work for change at the systemic level.