It’s spring. The pollen map on my phone’s weather app makes it crystal clear that anyone with allergies is probably suffering if they live in New Mexico—and most of the rest of the country as well.

It’s a mystery why my body would want to treat its native environment as hostile; after all, I grew up in New Mexico, so why should I be allergic to it? There are some who say that allergies are a body’s adaptive behaviors—that, at some point, my body learned that those pollens (and mold spores, when I lived in New England) were detrimental to my well-being. I certainly don’t remember that occurring on a conscious level, but at some point it must have. Over the years I’ve tried a number of countermeasures, from prescriptions to local honey to pressure points and acupuncture. I am better off than at times in the past, but there are still days when I must pull out a bottle of over-the-counter pills in order to be functional. 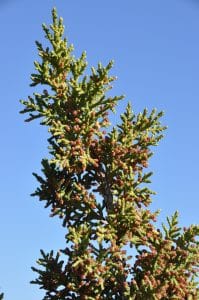 I was engaged in an email conversation a few days ago with a friend whose “juniper fever” is so severe that she isn’t functional much of the time. I know others who take vacations away from New Mexico each year during allergy season. I can recall days on end when I knew that, at a functional level, I really was “sick” because my body was reacting so strongly to the pollens in the air. I might not have been contagious, but I was ill. 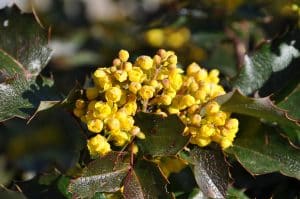 It’s a mystery, and a paradox, that beautiful blossoms cause so many people to sneeze. It’s both mystery and paradox that something so necessary to the gift of life simultaneously causes so much suffering. It’s a mystery to me how my body responds to external stimuli of various sorts—and how those responses can change over time. My mother says her allergic reactions have decreased as she has aged…I’m certainly hoping I’m wired the same way!

Do you have allergies? How do you respond when the pollens appear? Does your environment—native or not—feel like an enemy combatant? Can you both seek a cure and embrace it anyway? Can you embrace the mystery and paradox hidden within such situations?

I don’t have allergies, at least from pollens. However, I have mild dairy and food based allergies, made worse, likely by the GMO expansion and artificial additives in food. I find if I’m not attentive to my general food health, my sensitivities to airborne allergens increase.

Years ago, when my mom was diagnosed with terminal colon cancer, I became hyper-focused on learning about environmental and food related factors which can effect our bodies’ ability to function optimally. I was particularly interested in those researchers and experts who’d drawn connections between internal body health and the external health of our environment. At the same time, I more seriously turned to spiritual practices and teachers, as it became obvious that “biology alone” might not be enough to heal from some conditions.

This attunement to the natural world’s cycles and systems and our relationship to them has inspired my work and thinking ever since.

When Spring begins to bloom, I feel enormous gratitude that I can re-allign with the return of what feels like pure inspiration. I am so grateful that as each Spring season emerges, I feel the same return of excitement I did when I was in my 20s. I get back in touch with my ability to dream, to feel the core of what brings a feeling of newness. Now in my 50s, encumbered with more responsibilities and pressures, more challenges and awareness of mistakes made…I find it miraculous, that I am blessed to receive this annual gift that removes me a bit from the mind’s limitations.

Much of this core thrill, is related to being OUT in Nature. Where we can feel life emerging — the miracle of the natural world opening, blooming, reaching out after a winter of stillness.

I had a teacher who was from Lakota and Congolese origins. She was a spiritual teacher who had blended her ancestral practices into one new form, called the Seven Directions Practice. She also developed a system for bringing these principles and orientations from the natural, intuitive world to the business environment. One strong orientation that she used, was to share how her elders saw the time of year from Winter Solstice to Summer Solstice as “The Time of Making”. And conversely the time from Summer to Winter Solstice as “The Time of Unmaking”.

She suggested that we humans benefit when we align any of our activities, especially in business, with the larger natural cycles and energies that we belong to. So the Time of Making is about pushing new ventures, goals and efforts out into the world — much like athletic pursuits where we have to push beyond our comfort zone. Then the sequential Time of Unmaking, is about reviewing, discerning — strengthening what we just pushed out in to the world during the first 6 months of the year.

Thank you, Michelle, for sharing your wisdom and your experience. I was born in the spring, and growing up never enjoyed the season because of how inhospitable the spring winds felt, blowing sand into my hair. Living in New England helped me to recognize the beauty and energy of this season of Making. Now here at home I grow plants to help me connect with that energy, and look forward to the rains of summer, which bring fruitfulness.

Ironically, I couldn’t reply sooner to this lovely reflection because… you guessed it… I’ve been so sick from my allergies — even worse than when we last emailed. They morphed into sinusitis and the meds I’m now on are making my GI track miserable. The good news is that I’m actually doing fairly well embracing the mystery and paradox, having said frequently that, as miserable as I am, I feel so totally blessed to be able to live here! Stock tip: invest in Kleenex…! hugs through the gunk – Jan

Yes, Kleenex would certainly seem to be a good investment for both of us! I’m thrilled that you can see the blessings in the paradoxes like this…and a big hug back to you!
Shirin