…in my flesh I will see God;
I myself will see him
with my own eyes—I, and not another.

This week I participated in a Bible Writing Hour. A group of us gathered together, were given a portion of scripture (from Job 19, this Sunday’s lectionary), and invited to write whatever came to mind, stream-of-consciousness style, for 20 minutes. It’s pretty amazing what the mind can come up with in 20 minutes—where it can go, what it can explore. It’s also pretty neat what the heart brings out from the soul. In my case it was a lot of questions—which didn’t surprise me, since asking questions is the role of the spiritual director.

The question that caught my attention afterwards, as we read to each other what we had written (as offerings; the only suitable response was “thank you”), was “Can God photograph?” What I meant was “Can God be photographed?” Here is a portion of the stream of consciousness that led to that question:

“In my flesh I shall see God.” What would it be like to see God, given that scripture has always been so afraid of anyone seeing God face to face? Is God really that horrific? Is God really that amazing? Is God even comprehensible for my human brain, or is it that we will be transformed? … “With my own eyes.” In this “democratic” age beholding a leader isn’t such a big deal as it would have been back then. If I remember correctly the Pharaohs were not to be looked at because they were gods. But now it’s different; there are pictures of everyone. Would God photograph? Would God look “normal” or is there something that is beyond the range of film or human eye to capture? What would a photograph of God look like? Would it be something that could be transmitted, or is God more something to be felt or experienced? Job hopes that God will be somehow discernible by human standards…do I want God to be that way? Do I want God to be comprehensible? Or would I prefer something ineffable, immense…as if I have a choice! But that raises the question of what God really means to me, in my life. Do I want a comprehensible God, as Job did? Or do I want a God that is beyond my comprehension, because then it would make sense that I did not comprehend God in life. … I wonder which is better for the human psyche, the human soul. The human spirit. 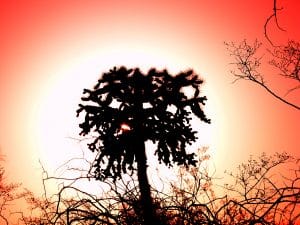 I’ve taken a number of photographs over the years that I dare to believe hint at God. This one, which I call “burning cholla,” was taken at a retreat center outside Tucson, Arizona, and is my version of the burning bush. I offer it as just that: a hint, a glimpse. A photograph….

Which question in my stream-of-consciousness writing captured your attention? Is there a hint of God in there somewhere for you?