Henry and I are traveling this week. A few hours ago we were driving in Queens, New York and rounded a corner to find traffic stopped on the Jackie Robinson Parkway ahead of us. As Henry brought our rental car to a stop, we saw people leaving their cars and running ahead down the roadway, to where our lanes passed under the surface-level street overhead. A closer look revealed that the chain link fence and older metal railing had both been torn away from a section overhead, and–unbelievably–there was a dark SUV upside down on the concrete jersey-barrier-type median between the inbound and outbound sides of the roadway.

Henry’s response was to say, “I wonder if they need a priest.” He grabbed his anointing “oil stock” out of the trunk of our car and ran ahead while I moved into the driver’s seat of the car, ready to pull over to the tiny shoulder area if traffic started before he returned. I found myself automatically praying for the people involved in the accident. Drivers from nearby cars were milling around, talking with each other. The relatively short distance between our car and the accident told us that it had happened mere moments before we turned that bend in the roadway.

A few cars began to pass by from the other side, and (quite quickly) siren sounds began to approach from both directions. As people began returning to their cars and driving onward, Henry returned with the good–and again, unbelievable–news that the accident victims had somehow walked away from the overturned SUV. He climbed into the car and we slowly continued on our way, past the vehicle and the group of victims and good Samaritans huddled by the side of the road under the underpass. As we drove on, we marveled at the miracle of survival that we had just witnessed. 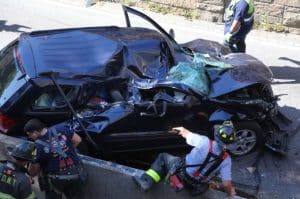 Neither of us thought to grab our cameras and record the image of the vehicle, upside down across the median. That wasn’t our primary consideration, despite the fact that we are both photographers. Our thoughts had been for the victims, and for our roles as priest and intercessor. And so, as I thought about writing on this accident, and the miracle of survival, I did not have any photos to accompany this story.

A part of me thinks that this is just fine–but another part of me wants to emphasize the amazing good news that this story is. So we found a news article on the internet and I copied one of the photos from that news article (thank you, Riyad Hasan) to include here. Unfortunately, Riyad was taking photos from above, after the SUV had come off the median, so it isn’t as dramatic as what we saw–but the damage is clearly there.

My questions for pondering are twofold.

First, what do you believe would be your initial response to witnessing disaster? Have you ever had the chance to “test that theory” in an actual disaster situation?

Second, have you ever witnessed a survival miracle? What was your response? What goes through your mind when you hear about such stories?